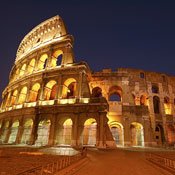 The ancient Romans celebrated the feast of Lupercalia in February with bloody sacrifices and fertility rituals. In later centuries, the Roman fertility holiday merged with the Catholic Saint Valentine's Day.

Feb. 14 hasn't always been celebrated with flowers, over-decorated chocolate boxes and cards filled with fuzzy sentiments. It's a day steeped in gory pagan ritual, with an executed priest as its patron saint.

In ancient Rome, February was recognized as the beginning of spring. Spring was a time of cleansing and focusing on fertility. The ancient Romans celebrated the feast of Lupercalia as a fertility ceremony from Feb. 13 through Feb. 15. Men sacrificed a goat for fertility and a dog for purification. The men cut the goat's hide into strips and dipped them in sacrificial blood. The women then lined up to be slapped with the bloody hides to increase their fertility. This festival culminated in a lottery in which every single man drew a woman's name from a large urn and paired off with that woman for the duration of the year. These unions often resulted in marriage. If a particular pairing didn't work out, the dissatisfied couple had the next Lupercalia feast to look forward to.

Multiple legends exist regarding Valentine's Day's namesake. According to one legend, a priest by the name of Valentine secretly married young couples in defiance of Emperor Claudius II's edict banning marriage for young men. Claudius II believed single men made better soldiers for the Roman Army. To ensure a steady crop of loyal soldiers, he simply made it illegal for young men to marry. Valentine, sympathetic to the plight of young lovers, would perform clandestine marriage ceremonies. When Claudius II learned of Valentine's activities, he ordered his execution. The Catholic Church recognizes two Valentines executed by Claudius II on Feb. 14 of different years, and has canonized both Valentines as martyrs. Pope Gelasius I combined St. Valentine's Day and Lupercalia in the 5th century A.D., in part to honor the martyrs and also to purge the pagan rituals associated with Lupercalia.

About the same time Romans celebrated St. Valentine's Day, the Normans had their own celebration, Galatin's Day. The translation for "galatin" is "lover of women." Because the words "galatin" and "Valentine" sound similar, the two may have ended up being used interchangeably, and traditions may have merged.

By the 17th century, ritual had given way to expressions of affection in the form of handwritten notes or small gifts. By the end of the 18th century, printed cards had replaced handwritten notes. In America, Esther A. Howland is credited with selling the first mass-produced commercial valentines in 1850.