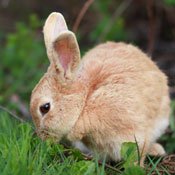 Throughout my childhood, nothing other than Christmas morning made me happier than Easter Sunday. I would wake up to an Easter basket filled with hollow chocolate bunnies and other goodies, and a hunt for eggs in the yard.

I relished the Easter bunny like I did the tooth fairy and Santa Claus, other magical beings that brought me things. My father, wanting me to keep me a child for as long as possible (he tried to convince me Santa Claus was still real when I was 12 by making footprints in the ashes of our fireplace), always had an Easter egg hunt after church, even in our teenage years. The eggs went from being filled with candy to being filled with money, and my brother and I would revert to children again, fighting over the last egg in the yard.

We have quite a few magical tales we tell our children. We tell them about beings that sneak into our houses at night while we are sleeping to leave us money under our pillows, or chocolate and gifts. I always pictured a giant rabbit wearing pants when I thought of the Easter bunny. But where did the concept of a bunny rabbit come from? A bunny rabbit that leaves us … eggs?

The bunny began as the symbol for the pagan goddess of fertility, Eastre, worshiped by pre-Christian Anglo-Saxons. She was also the goddess of springtime, and her symbol was the rabbit because of its ability to conceive a second litter while already pregnant. The rabbit became the obvious choice as the sign of fertility.

The pagan feast celebrating the return of springtime, or the vernal equinox, conveniently coincided with the Christian celebration of the resurrection of Christ, and over the years, as missionaries tried to convert the Anglo-Saxons, beliefs were mixed, and the feast eventually turned into the traditional Christian holiday of Easter that we celebrate today.

The Easter bunny as a symbol of Easter was first seen in Germany in the early 1600s, where they made edible bunny sugar pastries and ate colored eggs after Lent. The tradition of eating colored eggs for Easter had to do with the fact that eggs were banned during Lent, resulting in an overabundance of eggs during Easter. The eggs would be colored red to symbolize the blood of Christ and green to symbolize the coming of spring.

German immigrants brought the tradition to American in the 19th century, telling their children that if they were good, a hare would come and put colored eggs in their hats and bonnets. Over the years, the Easter hare became a bunny, and the eggs were filled with chocolate, and, soon, it turned into a hunt for pastel Easter eggs.