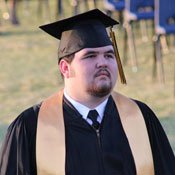 Watson Dollar's parents chose to send him to mainstream schools instead of putting him in a state institution. Dollar, who has autism, graduated from Mendenhall High School in May 2011.

One night last fall, Watson Dollar became angry when his mother would not let him drink from her water bottle. At the time, Pam Dollar was fighting a cold and did not know how to explain to Watson why he couldn't drink after her. Watson has limited language capabilities due to the autism he developed at age 2.

She grabbed her iPad and launched the Proloquo2go app that helps people with special needs communicate.

"Mom is sick," she typed on the application's type-pad function "When people are sick, they have ..."

"Germs," Watson, 20, typed, finishing her sentence. From there, still using the device, mother and son did something they hadn't done in Watson's entire life: They had a discussion.

"It has absolutely opened up his world," Pam Dollar said. "We've been waiting for 20 years to have a conversation with him." Before that moment, the Dollars had to guess at what Watson was trying to tell them, even for his basic needs and wants.

Pam Dollar is confident that the breakthrough would not have happened if he were institutionalized. For one, it's unlikely he would have had access to cutting-edge technology like an iPad in a state hospital.

The Dollars insisted that their son take general-education classes with the help of a one-on-one assistant from the time Watson was in kindergarten through seventh grade.

Being exposed to that environment--in which he learned the same spelling words as his peers, for example--likely contributed to what Pam Dollar characterized as a breakthrough.

For the vast majority of mentally ill Mississippians, however, institutionalization is exactly what's happening. A growing chorus of mental-health advocates believes the state should move away from an institution-based approach in favor of home care and community-based services. Among those groups is the U.S. Department of Justice, which admonished the state in December 2011 in a letter to then-Gov. Haley Barbour.

"Thousands of Mississippi residents with mental illness or developmental disabilities are institutionalized," wrote Assistant Attorney General Thomas Perez to Barbour and other state officials. "While confined in these institutions, they are segregated from non-disabled persons and lead lives of limited choice or independence. They are deprived of meaningful opportunities to choose friends, participate in employment, or make choices about activities, food or living arrangements.

"We conclude that the State of Mississippi fails to provide services to qualified individuals with disabilities, including mental illness and developmental disabilities, in the most integrated settings appropriate to their needs, in violation of the (Americans With Disabilities Act). This has led to the needless and prolonged institutionalization of adults and children with disabilities who could be served in more integrated settings in the community with adequate services and supports."

For what Mississippi pays to institutionalize one person with developmental disabilities, it could pay for four people's care in the community, the DOJ found. According to information from the state, Mississippi spends an average of $110,000 per year to care for one person in one of the state's five regional mental-health facilities. Comparatively, treating the same patient in the community would cost $27,000 per year.

Despite the potential cost savings and the federal laws that require states to treat mental-health needs through the most integrated means possible, Mississippi continues building new costly treatment centers.

In fact, the DOJ found, Mississippi is the only state in the U.S. where more than 25 percent of people with developmental disabilities are treated in state hospitals.

In 2010, the Southern Poverty Law Center filed a lawsuit in U.S. District Court in Jackson, arguing that children with behavioral or emotional disorders "face a rigid, facility-based mental-health system that both ignores and exacerbates their needs." That suit alleges that mentally ill children must "either deteriorate to the point of crisis required for involuntary hospitalization or submit to unnecessary institutionalization" because the state offers too few alternatives to institutionalized mental-health treatment.

Mary Troupe, executive director of the Mississippi Coalition for Citizens with Disabilities, which is also a plaintiff in the suit, said her group is part of a community-care alliance that is developing a five- to 10-year mental-health plan and working to educate state lawmakers who are in the throes of budget negotiations.

"It has been a tremendous effort to get legislators and agency directors to understand that if a person has disability, they can live in the community," Troupe said.

So far, attempts to overhaul the state's mental-health system have met resistance, both from state lawmakers and hospitals, fearing that jobs will disappear from the districts they serve if more people are treated outside of institutions. Troupe asserts that the jobs will not vanish but simply shift to the community; other state institutions will remain for open for people who need institutional care.

Mostly importantly, Troupe believes that mentally ill patients and their families deserve to have a choice. Because of the state's mental-health policies, we're "locking away" smart, talented people like Watson Dollar, Troupe said.

"We're not taking care of them," she added. "We're housing them."

When my twin daughters were young and being diagnosed with autism my one twin had considerably more signs of autism than the other. She was non verbal and had many self injurious behaviors. A social worker working with our family at the time to help us get resources suggested we send her away because she took so much work and they thought she would never speak, be potty trained, etc. My other daughter went though years of being misdiagnosed before they finally gave her a diagnoses on the spectrum. My daughters are 17 now and the one I was told to send away is smart, talkative, and loves art. She is quirky but we can't imagine life without her or her twin. She is homeschooled now but when she was in public school she was an academic high achiever staying on the honor roll, high honors and even earning the Assistant Principles Award for the second highest grade point average in the school. The people/children many rush to put away can and do lead valuable lives if given the chance. We like to think all developmentally disabled people are permanent children and all mentally ill people are dangerous. These groups neither they are people first.