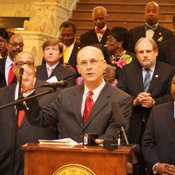 Up against a deadline to pass bills out of committee, Sen. Hob Bryan, a Democrat from Amory, left two controversial bills off his committee's schedule today.

Two of the most contentious bills of the current legislative session--an anti-abortion "heartbeat" bill and an anti-undocumented immigration measure--won't become law in Mississippi after all.

Sen. Hob Bryan, D-Amory, who chairs the Senate Judiciary B Committee, where Lt. Gov. Gov. Tate Reeves assigned the bills, declined to include either measure on the agenda for today's committee meeting. The meeting was originally scheduled to take place at 2 p.m., but Bryan said he moved the meeting to an earlier time because today is a busy deadline for lawmakers to pass bills out of committee.

Although Lt. Gov. Tate Reeves' assignment of HB 488, the immigration bill, and HB 1196, the "heartbeat bill," to Bryan's committee was an indication that he wanted to see the bills die, Bryan also strongly suggested yesterday that he was personally leaning against both measures.

Talking about the bills at the Stennis Capitol-Press Forum yesterday, Bryan said even though he shared the concerns of his fellow lawmakers about undocumented immigrants, he did not believe lawmakers should tell local cops how to do their jobs.

"We would be telling local policeman how to behave when they arrest somebody, and I just don't think that's a proper role for the Legislature," Bryan said today at the conclusion of the Jud B meeting.

On the "heartbeat" bill, HB 1196, which mandates doctors to look for a fetal heartbeat before performing an abortion--a procedure that could require using an invasive transvaginal ultrasound probe early in pregnancy--Bryan said he had some questions about the bill's constitutionality. In the past, whenever abortion-related bills arose in the Senate, legislators examined them to see if they would pass constitutional muster, he said.

"What we have not done is to pass bill after bill that was obviously unconstitutional just so we could all get on the record one more time as casting one more vote (against abortion)," he said.

He added that if Mississippi passed its heartbeat bill, someone would likely file a lawsuit immediately.

Bryan was hopping mad as he talked about the state's fiscal woes. The state senator questioned the wisdom of lawmakers who claim the state is too broke to adequately fund education while offering tax breaks that cut into the state's revenue stream.

"The same time we have been pinching pennies, the Finance and Ways and Means Committees have opened the back door to the state treasury, and they're shoveling money out like there's no tomorrow," Bryan said.

Bryan estimates the credits would cost Mississippi taxpayers between $119 million and $133 million per year. Walmart can afford to keep paying the inventory tax easier than Mississippians can, he said.

"You could triple Walmart's inventory tax, and it wouldn't slow them down," he said. He also took exception to a plan to exempt churches from paying sales tax on utility bills. The proposal, HB 582, would affect some 5,000 churches in the state and cost the state's general fund approximately $1 million.

"I've not heard any suggestion anywhere that any church was crying about paying sales tax on its utility bills," Bryan said. "This is some high-profile hot-button issue that some legislators think will do them some good politically."