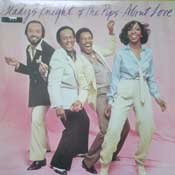 Charles Moore's collection of vinyl records, including many from Gladys Knight and the Pips, was impressive.

It was the late '90s, and I walked to the front door of a home in northeast Jackson, a part of the city this south Jacksoner did not even know existed until that very moment. I went to pick up Catherine, who would eventually become my wife, from her parents' home for our first date. I looked and dressed almost the same as I do now, with my LRG T-shirt and Dickies shorts replaced with a Wu-Wear T-shirt and wide-legged jeans. The infamous beard was still a few years away.

As I walked in, I met Catherine's father, Charles Moore. He was a tall, kind of goofy-bumbling-professor type who was nice to me, even though I was there to whisk his daughter away. We did not get much time to talk and get to know each other on this first meeting, as is to be expected given the circumstances. I learned a lot about Charles that day, however, when Catherine took me to the den saying, "You've got to check this out."

In the back of the house, an entire wall of thousands of vinyl records stared back at me, taunting me to cancel the date and get my fingers dusty. I went through with the date, knowing the records would be there for me later. I set up a second date with Catherine before we got in the car to go to the movies.

As the years passed, and I got closer to Charles, I learned a lot about his collection. Charles inherited a good chunk of the collection from his uncle, "Big" Charles Harrison, who taught at Sewanee: the University of the South. Included in this lot was a classical music collection as immense as anything I have ever seen. The rest of the collection was made up of Charles' additions over the years, which reflected his varying tastes and love of jazz, folk, more classical and Gladys Knight and the Pips.

Cut to about a year ago. Charles Moore had just passed away on July 11, 2010. Catherine and I were sitting in the old man's office, looking through his record and book collections, trying to sort things out. After 12 years, I finally had an opportunity to sift through the records, putting my hands on every one of them as we decided which ones to take with us and which ones to let go. Charles' collection would live on by our collection doubling in size. It's interesting how music can unite us over time and planes of existence.

I've heard it said that women often marry men that in some way remind them of their fathers. Luckily, this held true for me.

Catherine, who remembers fondly packing and hauling books and records during every family move, witnessed her life coming full circle when she married me and my collections that need constant attention, especially during moving times. Together, we have amassed a collection that will always equal Charles' in spirit, but probably never in immensity.

As I sit here and watch a Coltrane record that we brought home from Charles' collection revolve on the turntable, I think about music and full circles: the full circle of Catherine's life; the full circle of Charles' collection rounding off into ours; and the circle that was completed when the family donated rest of his collection to the music department at Sewanee to stock the school's brand new media room. It's comforting how much happiness can come out of the sorrow of death when we stop and appreciate the music that emanates from spinning circles.