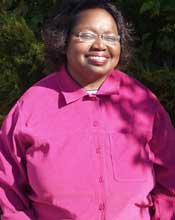 Angela Taylor grew up in a family that taught her to help others and be an independent thinker. "My parents were active in the Civil Rights Movement," she says. They helped establish an integrated hospital waiting room in Wayne County, and named each of their children after people in the movement.

Taylor, 40, is originally from Millry, Ala. In 1993, she earned a bachelor's degree in sociology from Stillman College in Tuscaloosa, Ala., and in 1995, a master's degree in vocational rehabilitation counseling from Jackson State University.

Today, Taylor dedicates her time to helping the elderly and disabled live better, more active lives. She works a day job as a dispatcher for 911 in addition to her volunteer work for the disabled community.

Taylor says she has encountered difficulties in seeking employment due partially to her disabilities. She has suffered from juvenile rheumatoid arthritis since age 7. Symptoms of the condition include deformity in the joints of her hands and feet, causing difficulty walking and manipulating objects with her hands. She tried unsuccessfully for years to get employment with the Department of Rehabilitation Services in Mississippi.

"I have found that disabled people being unable to get work is a widespread problem (in Mississippi)," Taylor said.

She helps make sure people understand their rights under the Americans with Disabilities Act. She also mentors children with all types of disabilities, teaching them and using her education as a source of inspiration for the children and their parents to show that their disability doesn't have to hold them back from getting good educations.

Taylor's primary volunteer work involves helping the elderly as a member of the Highland View Apartments Activity Council. "I try to make sure they get the supplies they need," Taylor says. "We provide bingo, Bibles and computer labs. A lot of the residents can't drive, and it's the brightest spot in their day to use these computers."

Taylor also teaches classes on using the Internet, helps residents get their prescriptions and collects donations of items such as coffee, printer paper and movies for the residents.

"My advice to the disabled community is to never give up," Taylor says. "Be informed; be active; watch the news; go to the library; know the laws; know your rights. ... People should be informed and learn to stand on their own. You need to find another way to get around obstacles."