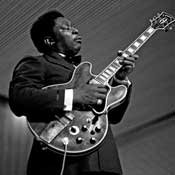 Medgar Evers' work has never been forgotten. To honor his memory, the Evers family has held a Medgar Evers Homecoming event each June. In 1973 Mayor Charles Evers and B.B. King collaborated to sponsor concerts in honor of the slain civil rights leader.

From this beginning, the homecoming has become an annual multi-day celebration that includes concerts, a parade, a gospel memorial show and other activities.

In addition to B.B. King performing, the annual event has featured lineups of leading blues, R&B and gospel acts.

This year marks the 48th Annual Medgar Evers/B.B. King Homecoming. The celebration begins on June 9 from 6 p.m. to 9 p.m. with a gospel memorial show at the Friendship Church (2948 Bailey Ave.). Gubernatorial candidate Bill Luckett will be the guest speaker.

At 7 p.m. on June 10, a Homecoming Banquet will be at the Greater Mount Calvary Church (1400 Robinson St.). Cost for the banquet is $50 and the guest speaker is radio talk-show host Rip Daniels ("It's A New Day").

The Homecoming will culminate June 11 with a parade beginning at 10 a.m. at the Freedom Corner a t the intersection of Medgar Evers and Martin Luther King Jr. boulevards and a blues concert at the Elks Lodge (3100 John R. Lynch St.) for $40.