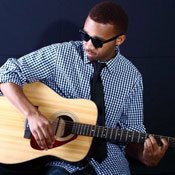 I'll never forget the first time I saw Kerry Thomas, known as KT on stage, perform live at Dreamz JXN for Forever Friday. It was Sept. 10, 2010. Alone on stage with only an acoustic guitar and a microphone, he captivated a very vocal contingent of female audience members with his soulful renditions of Musiq Soulchild songs.

About halfway through his performance, my wife looked at me and, over the screaming women on the front row, said, "Damn, this kid is good."

As it turns out, that was one of the 26-year-old's first live performances; he played it cool like he had been having that effect on women with his singing for years. Thomas has known for a while that he could sing, but it wasn't until about three years ago that he got his first guitar, an impulse buy at a pawnshop. About two years after that, "I actually picked it up and tried to play it," he says.

Thomas taught himself to play the guitar watching videos on the Internet, trying to learn as many songs as he could. "Maybe I'll take lessons one day," he says.

The self-taught guitarist/singer says Stevie Wonder, Luther Vandross and Musiq Soulchild, among others, influence his "poppish neo-soul" vocal style. John Mayer, a young man that knows a thing or two himself about crooning for the ladies, inspired him to pick up his guitar two years after initially buying it.

On a road trip with a female friend of his, Thomas says all they had to listen to during the car ride was John Mayer. Instead of being annoyed by background music from one artist for the duration of the trip, he says, "I fell in love with (Mayer's) music, and he is the reason I picked up the guitar in the first place."

Thomas' current project is a collaboration album, "Love and Justice," with rapper Chief Lion. The duo, which has dubbed themselves Evani Tribe, expects to release the album in late spring.

"Love and Justice" is a concept album split into two parts. Part one deals with love and relationships—"my niche," the singer says, and the second half of the album, Thomas and Chief Lion deal with justice and political issues. The album features a guest appearance from one of Jackson's finest rappers, PyInfamous, and has "meshed together to become a beautiful project," Thomas says.

The singer also plans to release his solo project, "Songs About Her," in the fall of this year. "This one covers the full circle of a relationship," he says, "from meeting to resolution."

Thomas performs every third Saturday at Suite 106 (106 Wilmington St.) at 9 p.m. These performances are usually solo, acoustic affairs, but sometimes the musician throws a beat machine into the mix to switch it up.

You can also catch Thomas at any number of hip-hop-themed events throughout the city, as he is one of the most ardent supporters of the scene. He's even known to jump on stage with rappers to perform some back-up singing duties. Beyond all this, Thomas is one of the nicest people in the Jackson music scene, and he's always a pleasure to work with.

He sings, plays, and he's nice, ladies. Get in line, or you won't stand a chance.

To keep up with Kerry Thomas shows and upcoming releases, follow him at http://www.twitter.com/anotherredhead.