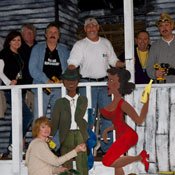 Members of the Verde Do Krewe take a break from building their float for this year's Mal's St. Paddy's Parade.

As a child, one's only real responsibility is to have fun, and obey our parents and other authorities. As we get older, though, things change. Careers, mortgages, families and countless other responsibilities begin to weigh down and consume our time. It's an understatement to say that growing up is bittersweet, but it is. It takes a special adult to remember how to let loose and have fun.

The Verde Do Krewe is a unique group that knows the meaning of a good time, and they believe there is no better place to party than at the Mal's St. Paddy's Parade. Tammy Bouchillon, Don Taylor, Stephen Rogers and Bill Stover make up the "high council" of this float krewe, though many others join them each year in helping design and ride on the krewe's two-level, 14-foot high float. Dancers and security walkers accompany the float, bringing the total participants to more than 30 people.

Since 2000, when the krewe first started participating in the parade, Verde Do Krewe has taken home an award in the parade contest. It was also in 2000 that the krewe established its name. Verde Do is the green hairdo, named for the bright green, curly-haired wigs that made up the krewe's first float attire. While they wore the attention-gaining wigs for a few years, the women on the float despised them, so they kept the name but lost the wigs. The group won "best float" in 2004 and 2008. Verde Do Krewe is responsible for setting a trend of returning its prize money (which has been between $500 and $1000 for first place in the past), according to Taylor, so that the winnings benefit the children's hospital.

"We're not in this to make money," Bouchillon says, and the others agree that their main purpose is to have fun.

With the exception of the Saturdays from January to mid-March the krewe devotes to working on their float, almost every other day of the year the group is just a bunch of average working folks. "We are legends in our own mind," Rogers says.

Every year, the group chooses its own theme that may or may not coincide with the parade theme. They've featured preppy schoolgirls and judges, but always include a live band every year. It's a party on wheels.

"It's like being the Rolling Stones at a concert," Bouchillon says.

Stover adds, "All those people are screaming, and they're screaming for you because you have what they want—beads!"

Folks in the community can feel like superstars, too, by joining the Verde do Krewe for the annual membership fee of $125. Once members, they are allowed to know the secret plan for that year's float. The group says that most members come to them. Most of the recruiting that's done, is by people who have such a blast participating in the float that they bring their friends, family, co-workers, etc., to take part and share in the fun.

This year, the parade's theme is "Hey, Hey the Blues is Alright ...," and Verde do Krewe will honor a special bluesman, Robert Johnson, who is said to have "sold his soul at the crossroads." You'll have to come to the parade March 19 to see everything this group has planned for your entertainment.