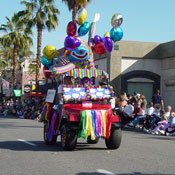 Outside New Orleans, you can find golf carts parades in places like Garden City, S.C., and Palm Desert, Calif. The Palm Desert parade, which started in the early 1960s, happens every October and draws upward of 10,000 spectators.

The Zippity Doo Dah parade is a special opportunity for the Jackson community to come together and raise money for the Blair E. Batson Hospital for Children. For the first time, the Sweet Potato Queens are setting themselves apart from Jackson's annual Mal's St. Paddy's Parade to have a parade of their own, which promises to differ greatly from what the city has seen in years past.

Instead of large floats, the Zippity Doo Dah parade features golf carts. The relatively small Fondren neighborhood requires a parade to be compatible with its size, according to Stacy Callendar, a member of the Fondren Women's Auxiliary, SoFo. Other parades around the country have used golf carts in parades, and that is how the local idea developed.

Each golf-cart float must be at least 80 percent decorated, allowing only 20 percent of the golf cart to display the sign showing who the group is. Strong regulations assure that the parade remains family friendly, but those boundaries do not limit creativity. Organizers encourage colorful and eccentric floats. "The tackier, the better," Callendar says.

To enter a float in the parade, each specific group had to submit a detailed sketch of their golf cart plan for approval by March 19. Callendar says that attendees won't even recognize some floats as golf carts.

Participants receive awards according to how outlandish and overwhelming their floats and costumes are. Watch for the "Fondren Fabulous Funk" award for "Outstanding funkiness in a float"; the "Zippity-Zoned-Out-Zealots" for "Y'all are the best looking things we ever saw. Really"; "Batson Bluebird" for "Heppin' the Chirren by being so cute—seriously we can't take our eyes offa you"; and "Super Satisfactual and Plenny O'Sunshine" for "Delightful Level of Wretched Excess Overall."

While the award names may be hard to say, the awards will be easy to see, as each winning float will display their award as they journey through the parade route.

The legendary Sweet Potato Queens take center stage at this parade, but any community group can participate. Callendar anticipates a strong sense of competition among the entrants, depending on how many actual participants take part in this year's inaugural parade. Next year, she expects even more mini-floats to join the parade.

The queens have their own competition, too. The queen group that brings in the most financial support for the hospital will ride with Boss Queen Jill Connor Browne on her oversized float (the only non-golf cart float allowed) at the parade's finale.

"Just like Santa Claus closes out Macy's Thanksgiving Day Parade, Jill and her queens will close out ours," Callendar says.

The Zippity Doo Dah parade is established to set an example for other communities that also could raise money for their local children's hospital or other worthy causes.

Callendar says that communities should pick their own local celebrities to feature, just like Jackson's local celebrity is Browne and the Sweet Potato Queens.