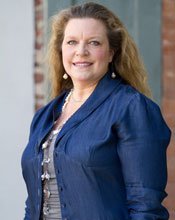 The bold, red door to Erica Speed's Fondren home is a fair indication of what's inside: Local artwork and colorful fabric designs cover furniture while family pictures fill a variety of frames on tables and walls. Books about Mississippi rest on her coffee table. Her three dogs--a lab, a golden retriever and mixed breed--greet her with enthusiasm.

Speed is a lover of family, community and life. Self-diagnosed with attention deficit disorder, she finds it difficult to balance family and other community commitments. But it may just be that she isn't giving herself enough credit. She served as the president of the Fondren Renaissance Foundation from 2008 to 2009, promoting preservation and revitalization of the Fondren community. Speed also served as a board member since 2004. While she no longer holds an official position, Speed has not stopped serving the community.

"Not being on the board is definitely less of a commitment, but I'm no less committed to Fondren," Speed says.

The Fondren Association of Businesses first developed while she was the FRF president, in 2009. FAB works with locally owned businesses to promote Fondren's viability, while encouraging environmental stewardship, safety and planning the future of the Fondren business district. Speed says FAB was a project of FRF, and she worked closely with local business owner Jeff Good and other board members to get it started. She says forming FAB was all about bridge building.

As devoted as she is to Fondren, Speed recognizes the importance of all the Jackson area. Her husband of 18 years, Stewart, is a developer of the Renaissance at Colony Park in Ridgeland among other projects in the metro.

Speed is originally from Atlanta and moved to Jackson in 1997. Though she and Stewart and their children, Isabelle, 14, and Warner, 11, returned to Atlanta in 2000, they soon realized Jackson was a better fit and returned in 2003.

Just recently, someone asked Speed if she was scared to walk around Fondren. "No. My 14-year-old daughter walks up there with her friends to get a burger from Brent's," she replied. "I'm not scared; I'm elated to be in the city of Jackson."

During Fondren's Zippity Doo Dah March 26, Speed is in charge of checking in the parade's golf-cart floats and ensuring that they have a smooth ride down the parade route.

She says she appreciates Jackson today for the same reasons she did when she and her family first moved to the area: "the warmth of the people and the ability to be involved."