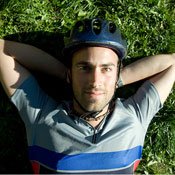 Men are often seen as individuals who ignore their health altogether. Here are some tips that, while not exclusive to men, appeal to my maleness.

Monitor portion sizes.
It's incredibly easy to eat more calories than you need for the day, particularly if you aren't paying attention to what you're eating. Look at caloric counts on foods before you buy them in the grocery store, and also look for them while eating at restaurants. The typical fast-food kid's meal has the suggested calories for the average adult's meal, so you probably don't need two Big Macs, fries and a carbonated, sugar-laden beverage.

Incorporate healthier meals into your day.
The United States Department of Agriculture suggests making half the grains you consume whole grains (refined grains have had some of their nutrients bleached out for consistency's sake). Also, eat a variety of fruits and vegetables, not just a few favorites. For meat-eaters, choose leaner cuts. One of the easiest ways to make sure you eat right is by planning ahead, so pack a healthy lunch and you won't be tempted to run by Sonic or Burger King come noon.

Try going vegetarian.
Even if it's just one day of the week or month, being wise about meat consumption can be crucial. Americans are some of the mightiest meat-eaters in the world; according to the USDA, we eat nearly 200 pounds of meat per capita per year—way more than the average person needs. Try getting your protein, iron and calcium from other sources, like vegetables and dairy products. You don't have to go vegan, but every steak counts.

Practice safe sex.
This should be a given. It doesn't matter if you're gay, straight or bisexual, it is completely stupid not to practice safe sex. Just about the only time you don't have to worry about condoms, birth control or contracting an sexually transmitted infection is if you have a long-term, monogamous partner, and even then, it's a good idea to talk with your partner about birth control if pregnancy is a concern.

The Centers for Disease Control recommends sexually active men, gay and straight, get tested for STIs every year, if not more often. Even though deaths from AIDS and HIV dropped from about 45,000 to about 20,000 annually from 1993 to 1997 (according to the CDC), other diseases, such as human papilloma virus, are increasing in prevalence with 30 million new cases of HPV reported each year, according to the World Health Organization in 2002.

Watch your drinking habits.
Alcohol has calories. Thinking of your health while drinking is probably not the most fun thing to do, but unfortunately, beer is notorious for its calorie and carbohydrate counts. Opt for a lighter beer (with calories clearly labeled) or drink water between beers. Limiting your drinking definitely has its benefits, not to mention that the Centers for Disease Control recommends it. While you're at it, cut down or quit smoking cigars and cigarettes, and avoid using illegal substances that require sharing a needle.

Get active at least three times a week.
The CDC says men should be active at least two and a half hours per week, but any activity is likely better than none. It's best to find a happy medium. If you're used to running 10 miles a day, keep it up, but if you're used to running one mile, don't try to step it up to 10 miles tomorrow. Trying to keep your body fit is pointless if you hurt yourself in the process.

Start now.
Don't start next week. Don't start in a month. Start today, or start tomorrow if you absolutely can't swing it today. The only way to change a sedentary lifestyle is to do something about it as quickly and routinely as possible, now.