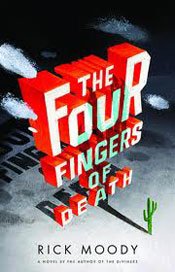 As you know, it's cold outside. So why not stay inside (where it's warm) with a few good books?

"The Four Fingers of Death" melds comedy with science fiction and bends the dimensions of weird to parts unknown with a fair heap of pop culture references peppered in, as well.

The protagonist of Moody's book is Montese Crandall, a less-than-prolific writer whose attempts at comedy often fall flat and teeter on being straight-up un-amusing. As an author, Crandall puts brevity on a pedestal that leaves the reader wondering if this is actually where postmodern literature is heading. Crandall's crowning work, in his own opinion, is the following line: "Go get some eggs, you dwarf." Yes, that's it.

The humor might be easily lost, but in an age where Twitter propels people to proclaim to the world they're going to go get some coffee or perform some other mundane chore with fewer than 140 characters, being succinct several times a day has inarguably become trendy to some portion of society.

Through the more than 700 pages that make up "The Four Fingers of Death," Moody references all sorts of current literature, though for Crandall this is the past. "Four Fingers" is set in the year 2025, so these references (which are rapid-fire throughout) might easily be missed by those who haven't read each and every book to which Crandall refers.

But a large chunk of the novel is actually Crandall's effort to write a novelization of the real-life 1963 science-fiction flick "The Crawling Hand," a movie about a dead astronaut's hand and its murderous spree on unsuspecting victims. Crandall's dying, gambling-addicted wife leaves him struggling for money, so this chance is something of a break for him.

Crandall takes great liberties with the re-writing, including an incredibly graphic homosexual sex scene between astronauts Jed Edwards and Jim Rose. Trust me, this sequence is not for the faint-hearted.

Edwards's hand is the victim of an attack by another astronaut, leaving him missing four fingers. After making it to Mars and getting all the way back to the Earth's atmosphere, NASA decides to scrap the mission and Edward's hand, having been infected with a bacterium that gives it post-mortem mobility, emerges from the ship's wreckage and wreaks havoc.

Moody uses Crandall as his proxy in the novel. And while hilarity does pop up throughout the book, it is often at a painfully lethargic rate. "The Four Fingers of Death" is a good book, but you might want to space out your reading of it.

"Platinum: A Novel"
If you have any interest whatsoever in the world of hip-hop and the lives of its movers and shakers, Aliya King's "Platinum" (2010, Touchstone, $24.99) will give you a small window to do just that.

King, a music journalist with considerable experience interviewing rap celebrities and their spouses, gives an insight into this world paralleled by few others.

What makes "Platinum" so engrossing is that the author's intimate understanding of hip-hop and rap celebrities makes prying apart fiction from reality nearly impossible. The reader is constantly left wondering whether the characters and their stories are allegorical or archival in nature.

Alex Maxwell, a freelance writer, is how we meet and get to know the many characters in King's novel. Maxwell is interviewing the significant others of some of the biggest names in the hip-hop game (which, not coincidentally, King did herself for VIBE in 2006).

Maxwell speaks with characters like Cleo Wright, a groupie of the uppermost echelon, and Wright's tales are among the most lurid of all. Every man wants her; every woman wants to be her; and the tales she tells would make a sailor cry.

Then there's Beth Saddlebrook, who, when her son Zeke remarks, "This bed smells like my daddy," she replies under her breath: "You mean it smells like a random groupie slut?"

King uses Maxwell to explore just how much women are willing to put up with when it comes to the misdeeds of their exorbitantly rich husbands. Saddlebrook is a prime example, in that her husband, Z, swept her off her bare feet from rural West Virginia at an early age. Recently, though, she has reasons to believe Z has relapsed into a drug addiction, as his career spirals downward.

Although sometimes the action in "Platinum" gets graphic, it doesn't linger, and following the characters' lives is as captivating, if not more so, than any reality TV show. With her novel, King shows that real life can surpass any oddity we can dream up.