Getting Kids to Eat Healthy 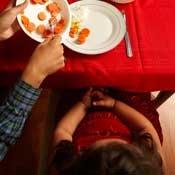 As a single parent, I know how easy it is to swing by a drive-through instead of preparing dinner after an exhausting day at work. We all know that kids beg for hamburgers, chicken nuggets, French fries and sodas. They can throw temper tantrums when they don't get what they want.

Added to that, we often allow our kids to stay inside watching TV and playing video games instead of insisting on outdoor physical activities. Between unhealthy food and lack of exercise, the result is often an overweight or obese child.

How can parents get their children to eat healthy when television commercials promote junk foods and restaurants? How do we convince our picky eaters that a plate of colorful fruits and vegetables are better for them than candy, especially when their friends have pantries filled with cookies, cakes and chips?

It all starts with parents. We are in charge of foods that enter the house. When you realize that healthy eating can sharpen children's minds and stabilize their energy and moods, you'll see the benefits outweigh the effort. Below are some ways to get kids to eat healthy.

• Take children shopping. Allow your kids to pick their fruit and vegetables. Help them through the process of weighing their choices, bagging them and even putting them on the conveyer belt at checkout. This will give them a sense of ownership; they won't be as hesitant to eat the healthier foods they brought home.

• Have kids help in the kitchen. Engaging children in preparing meals is fun. It can be messy, but they are more likely to eat what they have prepared.

• Get them gardening. If they help super-sweet cherry tomatoes, corn, peas, and other fruits and vegetables to grow, your kids may be more interested in eating them.

• Make a schedule. Kids should eat every three to four hours, broken down into three meals, two snacks and lots of fluids. Plan for these, and your child's diet will be more balanced.

• Pack snacks. When you are on a road trip or even out running errands, put a cooler in the car and stock it with healthy snacks such as carrots, pretzels, yogurt and water. You'll be less likely to rely on fast food.

• Plan dinners ahead of time. Planning weekly meals can be challenging. Try starting with two or three days at a time. Dinner should be balanced: whole-grain bread, rice or pasta; a fruit or a vegetable; and a protein source like lean meat, cheese or beans.

• Dip it good. If you are having a hard time getting your child to eat vegetables, experiment with healthy dips.

• Sneak in soy. Soy milk is a terrific source of healthy phytochemicals that can strengthen immune systems, among other benefits. While my son loves soy milk, some children aren't fond of it. Try sneaking soy into mashed potatoes, oatmeal and sauces.

• Have fun. The more creative the meal is, the greater the chances your child will eat it. Make silly food faces out of fresh fruit and vegetables and give them fun names.

Nutritionists say many children need to see a new food four to five times before they'll even try it, so keep introducing those fruits and veggies. By encouraging healthy eating habits now, you can make a huge impact on your children's lifelong relationship with food.

Overfed, Undernourished
American children are overfed and undernourished, according to the Centers for Disease Control in Atlanta, Ga. Unless we make dramatic changes in their eating and exercise habits, the CDC predicts that one in three children born in the United States today will develop
type 2 diabetes in his or her lifetime. The risk increases to one in two if the child is black or Hispanic. This means that this generation of children may have a shorter lifespan than their parents.

• American children get 40 percent of their calories from extra fat and added sugars.

• Nearly one in seven 10-year-olds get 50 percent to 70 percent of calories from snacks.

• Average soft drink consumption in 13- to-18-year-old males is three cans or more a day, and 10 percent drink more than seven cans a day. Soft drinks are given to infants as young as 7 months of age.

• French fries made up nearly 25 percent of all vegetables consumed by children and teens. French fries are the most popular vegetable for children under age 5.

• The average child between 2 and 5 years of age watches nearly 28 hours of TV a week.