History Made in Hinds 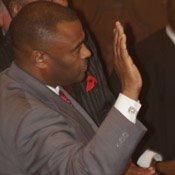 Much like television news directors who intentionally place sports and weather coverage at the end of the news broadcast to keep audiences tuned, organizers of this morning's Hinds County swearing-in ceremony were acutely aware of what people really wanted to see.

After approximately two dozen officials elected on Nov. 8 raised their hands and took the oaths of their respective positions, the crowd steadied their smart phones and digital cameras to capture the moment when Tyrone Lewis became the African-American sheriff of Hinds County.

Lewis, flanked by his family, including his young son who gave up part of his birthday for his dad's swearing in, sounded very much as if he remained in campaign mode. He vowed to build relationships within the community to fight crime.

"I can't do it by myself. I'm relying on each person in this room to have my back - because I've got your back," said Lewis, the only elected official to make remarks at the event.

Lewis takes the reigns from Malcolm McMillin, who held the post for 20 years. Despite taking his oath today, Lewis, along with county constables, will assume his duties Jan. 1. All other officials begin in their official capacities following the New Year holiday on Jan. 3.

Noticeably absent was Kenneth Stokes, the eccentric city councilman who will take over from George Smith as Hinds County District 5 supervisor. Circuit Court Judge Tomie Green, who presided over the ceremony, remarked that Stokes, who defeated Smith, the current board president in August, had a prior obligation that prevented his attendance and that she would administer the oath at a later time.