Where The Jobs Are ... and Aren't | Jackson Free Press | Jackson, MS 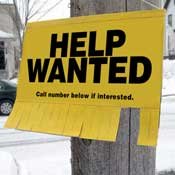 Where are the jobs? Everybody should move to North Dakota, where there are more jobs than people and more people than housing. But you don't have to go so far as Fargo to find work. While Mississippi has more folks out of work than a lot of other places, growth is happening here, too. The Mississippi Department of Employment Security projects job growth of close to 13 percent from 2008 to 2018. So the jobs are there—if you know where to look.

@Amayjuan_Zetta: Hoping to make bank as a server
@dandraorey: Opening up a gym at 5 am And parking cars at a hotel, arguing over who's next ... with 2 master degrees
@flipflops: busser/waitress at an American Legion. Since they fought for their country, they felt entitled to leer. I was 15.
@justincook: I was a janitor in a hospital. MEDICAL WASTE.
@donnerkay: I was a shampoo girl in a Neshoba Cty beauty shop run by racists.
@eddieoutlaw: I stocked office supplies at Kinkos while in hair school ... Wild, I know.
@GWSchulzCIR: Repairing newspaper boxes in San Francisco. You would not believe the things people put in them on the street.
@JusBeinMichael No lie. Picture it. Me. I was a butcher's assistant in a Forest, MS, small town grocery store. I cut meat & cleaned the meat saws.