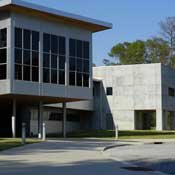 When large online retailers do not collect state sales tax, it hurts cash-strapped states and small business owners like artisans at the Mississippi Craft Center (pictured).

Sidewalks, busy sidewalks. In the air, there's a feeling that the economy might finally be picking up momentum if trends during the holiday shopping season are any indication.

"We're up over last year," said Julia Daily, executive director of the Craftsmen's Guild of Mississippi, which operates the Mississippi Craft Center in Ridgeland. "In this economy, we consider that a banner year."

Despite a national economy that continues to claw out from a recession, people are doing a surprising amount of shopping.

The NRF did not separate sales from those in brick-and-mortar shops from those of online retailers but did show sizable year-over-year increases for electronics, clothing and accessory stores, sporting goods, hobby, book and music stores, all of which are popular items to purchase online.

While booming sales figures are welcome for online retailers and politicians, it's not so great for local and state governments that experienced unprecedented revenue shortfalls during the economic downturn. States don't collect sales taxes from most online purchases.

The problem is so dire in Mississippi that Gov. Haley Barbour weighed in on the issue on his way out the door.

In late November, Barbour wrote a letter to U.S. Sens. Mike Enzi and Lamar Alexander, Republicans from Wyoming and Tennessee, respectively, expressing support for a bill they authored that would allow states to collect sales tax on online purchases.

"Fifteen years ago, when e-commerce was still a nascent industry, it made sense to exempt startups like Amazon.com from collecting and remitting sales taxes in states where they had no facilities," Barbour wrote. "Today, e-commerce has grown, and there is simply no longer a compelling reason for government to continue giving online retailers special treatment over small businesses."

Not only should states be allowed to collect taxes however they see fit, Barbour said, he added that failure to "level the playing field" could put Main Street retail operators out of business.

That Mississippi's notoriously anti-tax Republican governor called for what some consider a tax increase understandably raised eyebrows and distanced Barbour from notable members of his own party.

But local retailers such as the Mississippi Craft Center, which runs an online store of its own, now has to compete with much larger Internet companies for consumers who want hand-crafted goods.

Daily, the Mississippi craft gallery director, echoes Barbour in the need for online operations to charge a sales tax.

"It would make things more fair across the board," she said.

The bill would exempt online companies making less than $500,000 per year in sales. Misener argued 1 percent of Internet sellers make $150,000 a year.

In 2010, online retail sales grew 13 percent to $176 billion in the United States. Sales are on pace to grow 12 percent--to $197 billion--in 2011, according to forecasts from technology and market research firm Forrester Research.

Even if the federal online legislation becomes law, the next battleground will be in state legislatures.

"I don't think there's anything that we're going to vote on that's going to raise revenue," Baria said.

The state Department of Revenue recently reported $4.9 million less than expected in tax receipts in November.

Marty Wiseman, director of the John C. Stennis Institute of Government at Mississippi State University, called the prospect of an online sales debate a potentially interesting standoff between industry and local government.

"It's certainly something that's beginning to impact Main Street Mississippi," Wiseman said of the loss of state tax revenue. "It'll be an interesting discussion between business and industry and local governments in Mississippi. It deserves a thorough discussion before it goes down."

I think this has to happen. As much as I love the idea of not paying tax from Amazon, etc., we need to recover some of this revenue for the state, as online shopping is only going to be on the increase. And it's only fair to local retailers that we even the playing field and stop subsidizing online-only retailers over their brick-and-mortar brethren.