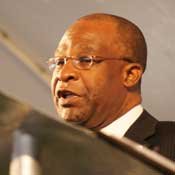 Hattiesburg Mayor Johnny DuPree wants to push back against legislative initiatives that might be harmful to black citizens.

By all measures, the state of black Mississippi should be strong. Mississippi's concentration of African American residents, 37 percent, is the highest of any state. Mississippi also has the highest number of majority-black counties, 25, and black elected officials (900+). So why did the Mississippi Black Leadership Summit, which took place in downtown Jackson last week, strike such a somber tone?

Most of it came down to the state's political dynamic: Blacks in Mississippi overwhelmingly vote for Democratic candidates, but Republicans overwhelmingly control state government, which has African Americans around the state nervous.

"Within 30 days, we're going to see a radical restructuring of state government like we've never seen before," Derrick Johnson, president of the Mississippi branch of the National Association for the Advancement of Colored People, told the summit crowd at the Jackson Convention Center. He was referring to the Republican near-sweep in the recent statewide election, which left the GOP in control of both houses of the Legislature and the governor's mansion.

Racial tensions reached a crescendo during the Civil Rights Movement of the 1960s in Mississippi and across the nation. Johnson, along with several other prominent blacks, believes that the state could return to an era when whites wielded power and blacks were relegated to second-class citizenship.

Speakers at the black leadership summit speculated that in a state that already trails other states in a number of quality-of-life areas, and where blacks lag behind their white counterparts in many of those same areas, various Republican-led branches of state government could make life difficult for African Americans in the years to come.

Johnny DuPree, the Democratic Hattiesburg mayor who lost his gubernatorial bid to Lt. Gov. Phil Bryant, likened Mississippi to a patient who needs to enter a treatment program.

He named education, jobs, health care and poverty as areas where blacks are at the greatest disadvantage. Jobs seemed to be the most immediate concerns to members of a black-leadership panel. Republicans have already indicated that deep cuts to the state budget could be on the horizon.

The NAACP's Johnson and other prominent blacks believe the Legislature might look to strip state jobs in Jackson, which they say would disproportionately hurt blacks. In majority-black Hinds County, the state employs 31,556 people. Another 14,000 people work for the state-supported Jackson Public Schools and the University of Mississippi Medical Center.

Johnson also believes that the issue of merging three historically black universities into one might be back on the table as well.

For their part, Republican-elected officials, from Lt. Gov.-elect Tate Reeves to House Speaker-designee Phillip Gunn of Clinton, have vowed to put partisanship aside, so it remains unclear whether all the hand wringing is justified.

In the meantime, DuPree and others say they will push back if the Legislature oversteps its bounds.

"We have won every fight we've been a part of. The problem is, we stopped fighting," DuPree told the crowd.

"Within 30 days, it's going to look like 1962," Johnson added. Wow! Hyperbole much? It's probably just me and my lily-white life, but as long as the NAACP and the Mississippi Black Leadership Summit and HBCU's continue to refer to themselves thusly, progress in the thought patterns of Mississippi and the rest of the nation will likely continue exactly as they are...and subject to injury by aggrandizing statements such as those by Mr. Johnson.

Good article R.L. This article touches on my points from 'kaze's last article. This last election cycle created a very diabolic (in the cruel sense), disproportionate shift of power to a side with a political agenda, that has not shown any kind of compassion towards the working poor or middle class in this state or improving the economic conditions - such as roads, education, health care or job development. With that said, I'm very nervous for whats in store for the future.

The most racially divisive aspect of this state's government is that the NAACP, HBCU, and MS Black Caucus exist; secondary to that are most of the [white and black] fraternities and sororities at our universities. They produce de facto segregation that severely hampers any progress that may be made towards complete racial integration. It is a simple social rule: If you want to be part of the group or a team player, stop trying to make yourself different and unique. Also, if state government needs to be cut, no one is picking on a specific race. The government will trim the fat and get rid of less needed or ineffectual job positions regardless of what race the employee may be. Why does the NAACP have to try to make this such a racially charged issue? The rest of the state is trying to move beyond race and deal with the simple economics of it all in our current time. This is no different than an industrial plant closing in a predominantly black small town. The plant owner isn't looking to punish black people. The plant owner is looking at his books and cutting his losses where he can so that he can stay in business. I challenge the aforementioned groups to take the first step and try, just TRY, to take one step beyond making everything a race issue. Maybe then they can band together with the rest of the team and help push EVERYONE forward.

"The NAACP's Johnson and other prominent blacks believe the Legislature might look to strip state jobs in Jackson, which they say would disproportionately hurt blacks." Is that because african americans are disproportionately represented within state gov't? I don't know the numbers but a DJ's statement would imply that.

Is that because african americans are disproportionately represented within state gov't? Robbie... I think you're misreading that implication into the statement. I believe he's saying the concerns is that the job losses would be focused in *Jackson*, which has a high proportion of African Americans in its population.

@ myndtheef They produce de facto segregation that severely hampers any progress that may be made towards complete racial integration. It is a simple social rule: If you want to be part of the group or a team player, stop trying to make yourself different and unique. I'm a proud member of Alpha Phi Alpha Fraternity, Inc. and let me respond on behalf of the brothers I associate with. We have signed off and sponsored white males to become members of our organization, which so happens to be AN HISTORICALLY BLACK SOCIAL ORGANIZATION! First and foremost we are a corporation with black roots, but we accept all ethnicities into our organization. As far as the NAACP, they have whte members and as we speak - the current president of the Jackson State Chapter is a white male. So the argument against the NAACP, is misinformed and not valid. The NAACP is an all-inclusive organization as well, The black legislative caucus is no longer - in my honest opinion - a necesarry evil, because blacks are now receiving appointments to committee's as chairs and as assistant chairs. So that is one argument I can see up for a serious debate. Everything else - tray again.

The most racially divisive aspect of this state's government is that the NAACP, HBCU, and MS Black Caucus exist; It's hard to argue that these groups -- let up in response to white-supremacist segregation and its lasting legacies -- "produce" the segregation, mynd. Granted, it's sad that they need to exist, but it's really scary to think about what the white guys that have long controlled this state would have done by now without those groups in place. You want them to be irrelevant and fade away? The first step would be for former Dixiecrats to stop pandering, with lies and welfare mother scares, for the racist vote. That is, tackle the source of the problem, not the responses. Otherwise, you're, uh, spitting in the wind.

Southern Debacle. Or no? History repeats itself. But, could all of this be the final un-doing of the nation itself? A polarized people further polarized will bring about anarchist conditions slowly manifesting in "american society". When Was America, ever really America? Things are no different across the River. A recent young-black-female state legislator, opted to not run for another term. She was the Chairman of the House Judiciary Committee in La's Legislature. She warned the then, candidates in an endorsement of one; that conditions had changed. Conservatives(Republicans) had the majority in the Legislature, and one should be ready to do battle. The rigours of a death knoll are resounding for calaminous disaster, as the cancer of classism, racism & successionist fervor spreads.

The first step would be for former Dixiecrats to stop pandering, with lies and welfare mother scares, for the racist vote. Good one Ladd ;-)