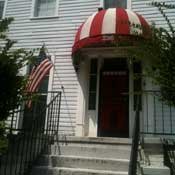 Grace House, a transitional facility for people with HIV/AIDS, blends in with its Millsaps Avenue neighbors.

The white building sits nestled between small houses on Millsaps Avenue. The striking red front door and the bright red and white-striped domed cover above it sets the house apart from others on the street. The building is one of five that makes up Grace House, the largest transitional housing facility in Mississippi for homeless people with HIV/AIDS of three in the state.

Grace House provides a home for men and women, and offers outreach and educational programs, grief counseling, and coordination with health-care providers. It is a place where HIV sufferers who would otherwise be unable to find any sort of assistance can come to find shelter and an opportunity to change their lives for the better.

"Grace House is no longer a place just to live, it's an opportunity to change your life," Operations Manager Teresa Viramontez says. It also provides free confidential HIV testing "and a whole lot of love."

Many of the people at Grace House are homeless because they have been thrown out of their homes, abandoned by family, or denied rent opportunities due to the stigma of HIV/AIDS infection and the ignorance of many people regarding how the disease is spread. Many people also suffer from substance abuse or mental-health issues, often tied to their homelessness.

Grace House's program includes introducing structure into residents' lives and preparing them to re-enter the work force. Lists of daily duties are posted at various places, and everyone does their part to maintain the buildings and grounds. One of the first things you may notice if you visit is that few residents seem to be around. Many are at jobs or school during the day; at least four residents are attending college. Residents speak to youth groups throughout the state about HIV and tell their stories.

"Everything here at Grace House is about self-determination," Viramontez says. "We are not a flop house. People are here to change their lives."

Words of inspiration are everywhere. On the stairs, each step has a word painted inside a white rectangle: courage, hope, wisdom, faith, love and healing. Every wall is covered in messages, Bible verses and handprints in multiple colors. Mission groups from colleges and churches throughout the state do many of these to commemorate their work here.

The house even has a resident "horticulturist" who sees to all of the plants, including a vegetable garden located in the spacious shared backyard. The man is a former substance abuser, and taking care of plants is therapeutic. "Part of (substance abuse) therapy involves getting a puppy or a plant," Viramontez says. "(It helps) take focus off of yourself and give something external to focus on."

A woman sits at the table in the center of the room, typing on a laptop. Piles of books, papers and folders lie on either side of her. The woman, who asks not to be named, is one of the four Grace House residents attending college. She's majoring in business at Hinds Community College.

"Things are going well," she says. "It's been typical so far; standing in line for hours for books, lots of homework."

Reginald, another resident, is dressed in a simple white T-shirt, a bronze-colored cross necklace around his neck.

"When I go to speak to people today I tell them I have AIDS, not that I am HIV positive," he says. "When you have an attitude of not hiding your status, it makes it easier to deal with it. If someone else has a problem with it, it is their problem. I don't let ignorance get to me."

Last year, Mississippi reported 550 new cases of HIV. In 2009, the state ranked No. 6 nationally in HIV infection rates among the 40 states that have confidential HIV reporting. Nationally, the number of new infections has remained around 50,000 per year for the past decade. Nationally 44 percent of new infections are in African Americans; in Mississippi, 78 percent of new cases are African Americans. Men make up the majority of new cases, and the virus is especially prevalent among men who have sex with other men. About 9,500 Mississippians live with AIDS.

"Many young people think they're invincible, but the highest age group (of people contracting HIV) is age 13 to 24," Reginald says. "They need to hear the message, to clear their misconceptions, such as thinking they won't get AIDS if they only have oral sex."