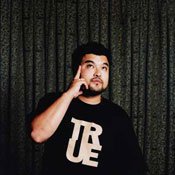 Let's start with a little history lesson. Back in the mid-1990s, hip-hop was at a crossroads. Groups like Company Flow and Anticon were pushing the boundaries of the genre into avant-garde directions that challenged the foundations of what could even be comfortably considered hip-hop. One of the leaders of this charge was a collective called Solesides, later known as Quannum Spectrum, made up of underground heavyweights Blackalicious, DJ Shadow, and Latyrx. For subterranean heads at the time like myself, Solesides was on the soundtrack to our lives.

Latyrx, made up of Lateef and Lyrics Born, in 1997 released one of the most groundbreaking hip-hop albums of all time, simply entitled "Latyrx: The Album."

If you know this record, you remember the first time you heard the opening track: a spacey DJ Shadow beat with Lateef and Lyrics Born rapping at the exact same time in a whirlwind of abstract lyricism that had not been heard before in hip-hop. Sample lyric from Lyrics Born: "'Cuz I've walked on water weapons baby haven't you heard? / I've authored songs on different planes and left the boundaries blurred / And I taught Neanderthal to use the rotary phone / I kicked the devil in his neck without my rosary on." It's ridiculously fresh 14 years later.

These days, Berkeley, Calif.-based Lyrics Born is still toeing the dividing line between hip-hop and other genres. His new record, "As U Were," delves into a more melodic sphere that explores electro-pop themes while remaining true to his unique almost-singing-but-still-rapping style. The change in direction is "a natural thing, and also an intentional thing," he says. "I've always been influenced by '80s music, electro, modern soul and modern funk. I wanted to pay homage to that. I just wanted to try some things that had always been in the back of my mind. I just go with it. I don't second guess it."

The change in direction will not surprise Lyrics Born's fans, as each one of his solo albums has been a departure from the previous. "I have ADD. I admit it. I embrace it. I am not capable of making the same album twice. I'm not that type of dude," he says.

For Lyrics Born, "As U Were" is "a turning point" that represents the changes in his life "musically, personally, and spiritually."

Lyrically, "As U Were" is a reflection of the times in which we live. "I've seen a lot of really important and crucial changes around me, such as the economic downturn. All of these things affect the mood, message and subject matter of the things I write about," he says.

Along with the larger social issues Lyrics Born deals with, the album also features more personal themes inspired by some "changes in relationships" that he has experienced recently.

Lyrics Born's live shows are always hype affairs. The live band Keys N Krates is currently backing him, adding another layer to his diverse sound palette. He brings that show to Martin's April 9, giving Jackson music fans a rare opportunity to see a true innovator in person. Lyrics Born's Jackson show is just one stop on the "As U Were" World Tour that will span the year.

"The goal by the end of 2011 is to play the entire world, even if it is under water. I'm ready to party with Jackson," Lyrics Born says.

Lyrics Born performs with Ivan Neville's Dumpstaphunk, BoomBox and more at Martin's Soldier Salute on April 9. Gates open at 4 p.m., tickets are $20 in advance from Ticketmaster and $25 the day of the show. All proceeds go to Trail of Honor to benefit American veterans.