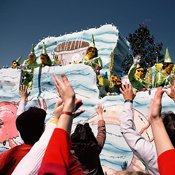 I have family all over Louisiana, so Mardi Gras usually happens for me every year. It has trained my hand to only procure the best of the throws.

It amazes me the level of competitiveness that I have seen over the years, a competitiveness that ends just as the last krewe passes by. I have had grown women pull strings of beads off my neck. One year, I witnessed Peyton Manning throw one of only two signed footballs to my friend—the most die-hard Saints fan I have ever met—only for a busty blonde to swoop down from above on her 12-foot ladder and take it.

I cried a little for him.

Here are some common throws of the Mal's St. Paddy's Parade (and maybe some that aren't so common). If you had to go by any list, this is your list of throws in my order of catching importance.

1. Coconuts A coconut is considered the most sacred of throws during Carnival and is sometimes thrown on Paddy's Day painted green rather than gold. They are rarely used at any other parade than Zulu. My mother caught one 30 years ago, and I have not met another person since who has, so if you see one being tossed, I encourage you to fight over it.
2. Flowers These are given out yearly by the wonderful Krewe O-Tux in Jackson in exchange for a kiss. By far the easiest thing to get if you're a female.
3. Cabbage Rare and usually thrown because of the color. Would not recommend eating.
4. Medallions Beads with medallions. Considered a little more valuable than just regular beads.
5. Beads The trick is to not be too close to the float, or they can't see you. Unless you want to elbow up to the very front, stand back and watch 'em fly.
6. D 'Blooms Easy enough to obtain, you just may have to pick them off the ground and watch your head. It doesn't feel good when a handful of them hit you.
7. Toys For the kiddies, so catch 'em and give them away. You more than likely will throw them away on the walk to your car.
8. Cups You'd think they were a great throw, but they get pretty annoying after an hour or so.
7. Koozies I never keep them. Are you really going to switch it out with every beer?
9. Bags they keep the other throws in Man, there is nothing worse than getting thrown the bag that carried all the beads that you didn't catch. Who wants the bag that no one else wanted?

I hope your St. Patrick's Day is a great one!