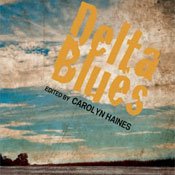 Blues melodies are gritty and rich with life's sorrows, just like the soil of the Delta; they haunt the listener long afterward. So does "Delta Blues," edited by Carolyn Haines (Tyrus Books, 2010, $17.95). An anthology of Delta storytelling featuring work from 20 authors, the volume captures the violent beauty of the Delta region. Though time periods and characters vary, the stories are connected thematically by an exploration of Delta culture and the sound of the blues. In these stories, men and women experience danger and triumph, heartbreak and mystery. Sometimes they find freedom from fear and, other times, they succumb to the worst decisions. Such stark contrasts are a part of Delta living.

In each story, the characters sought after and occasionally achieved freedom and justice. In "The Sugar Cure," Haines writes of a woman married to a captain at Parchman. She is free in name only and all but shackled by her violent, drinking husband. Parchman becomes a symbol of Nilla's captivity and the source of her escape. "Parchman prison stretched out in all directions, a place where anything except justice could take root and grow," she writes. Driven to the brink, she seeks her own justice. She no longer allows her weakness to get in her way.

Parchman features prominently in several other stories. "Fetching Raymond," written by John Grisham, explores the story of a family plagued by bad decisions and repeated imprisonment. Raymond, who "had been born with a vivid imagination, a quick tongue, and an inability to tell the truth," is on death row for killing a deputy sheriff. Questions of guilt and innocence haunt his family, who visit the prison for his last moments.
The true sound of the blues, though it often embodies joy and hope, can rarely be achieved without deep sorrow and loss. Toni L.P. Kelner describes the cost of the blues in "A Man Feeling Bad." Philip Akers hopes to create a magnificent sound in his talented blues singer protégé, but he only manages to extract disappointment and revenge.

Doubts about identity and guilt over a death arise in Michael Lister's "Death at the Crossroads." Maria Bella hopes to find peace in Mississippi after leaving behind a world defined only by tragedy, chaos and her own guilt. Yet those she knows can't help but suspect her for far greater sins. The blues represents her failure to cope with chaos.
Robert Johnson's supposed deal with the devil is the most famed tale of the legends that abound in the Delta. This sense of mystery surfaces in Daniel Martine's "Kidd Diamond." Kidd is haunted by Nick Belial, a Satan figure who shows up to claim his due; however, Nick doesn't count on a mother's hope for redemption. "Nick was a practical demon and knew when he was licked. ‘I rarely get outfoxed, only a handful of times in twenty millennia. And I get jacked by a two-bit dead hooker and a guitar-slinging fool,'" Martine writes.

In "Cuttin' Heads," Alice Jackson writes about the young girl Faye Mae, being raised by her grandmother alongside her half-brother. Her curiosity and stubbornness leads her to discover painful realities of race, cruelty and civil rights in the 1960s Delta: "When Dr. King had been jailed, President Kennedy had called, asking him if he needed anything. That's when Granny got photos of both men and hung them in her living room at the back of the Dew Drop. ‘These men are gonna make your life different than mine was,' Granny had promised when she nailed the photos to the bare pine walls." But as Faye Mae discovers, that difference doesn't emerge without heartbreak and violence.

Short fiction is often the most difficult of genres, and each author in "Delta Blues" attains it masterfully. The characters are well drawn and immediately captivating. Each narrative resembles the Delta itself—raw with emotion and surrounded by scorching beauty. The authors weave the blues into each story, providing a cultural backdrop and a soundtrack for the imagination. United by parallel themes, the book creates its own journey through the Delta.
In life as well as in fiction, trouble produces its own redemption. Grief and hope usually appear as companions. These elegantly crafted stories lead the reader through the pain of the blues to the joy found in this wild, mysterious, cotton-covered place.