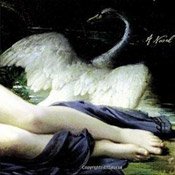 Kostova immediately grabs our attention when Robert Oliver, a painter, attacks a painting hanging in the National Gallery of Art. When Oliver refuses to talk to his psychiatrist, Dr. Andrew Marlow, Marlow is forced to probe into his patient's personal life, unraveling the mystery of the 18th century letters Oliver carries and the identity of the beautiful woman Oliver paints over and over.

Kostova, author of the ground breaking 2005 novel "The Historian," impresses once again with "Swan Thieves," as she switches effortlessly between time periods and the multiple narrative threads of her characters.

Kostova spoke by phone during a break on her book tour.

How did you develop these characters?
As with a lot of characters, they are a mix of real and fiction, but (they are) mainly fictional. As I look into each one, I see some qualities of people I've known and usually more than one person. Sometimes, I think one of the really enjoyable parts of writing fiction is that sometimes you feel as if a certain character surprises you. They walk on stage and want to be heard, and there were a lot of characters like that.

You mention a lot of art and art detail in this book. Are you an artist?
I wish I can say that I'm a painter. I really admire painters, and I love painting and art history. I was really fortunate working on this book because I know quite a few painters personally, either professional (artists) or very serious amateurs. Some of them let me interview them or watch them paint, either in the studio or landscape paint. I asked them lots of questions about why they chose a particular work, how they prepared their paints, and how they pick a scene or view around them. I also went and watched a very good painting instructor during a studio class, which was also helpful with the paint instruction detail in the book.

The Impressionists are the main art focus in the book. Are they your favorite artists?
I have been interested in the Impressionists for a long time. Like Andrew Marlow, the narrative character, I was burned out on Impressionists for a while because you see them everywherelike note cards, tote bags and even umbrellas, for example. There is a difference when standing in front of a real Impressionist painting and see the texture of the paint; and the brushwork is incredible. After seeing this, I came to appreciate Impressionists in a new way, especially the incredible view of nature it gives us.

How long did it take to write "Swan Thieves"?
I worked on this one for about four years. Actually, that felt really fast to me. It took 10 years to write "The Historian."

Do you feel as if there is a lack of art appreciation today?
I think that's a difficult question. I think we have learned to appreciate new art forms such as popular films, and I think that we don't experience painting like we used to. Before television and computers, paintings were sometimes the only visual views of other places that people had. There is something wonderfully restful about going to an art museum: You go in there, and you're quiet and focused, simply just looking at one painting.

What do you expect readers to take away from "Swan Thieves"?
I hope that readers will come away from it with a new or increased passion for art and color, and thinking (about) what artpainting in particularcan bring into our lives.