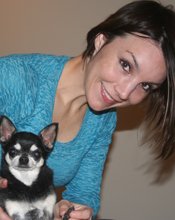 It may seem unlikely to see smiles on the faces of patients when walking into a doctor's, dentist's or therapist's exam room. But become a fly on the wall at Balance Studio of Massage and Skin Therapy with canine massage therapist Tara Richardson, 32, and that's exactly what  you will witness.

During a recent massage session, Peaches, Richardson's 15-year-old Chihuahua, had a blissful look of relaxation.

"Massage therapy on canines has the same benefits as with humans," Richardson says. Those benefits include relieving aches and pains from arthritis, giving a boost to the immune system and assisting with maintaining bone density.

"I have a medical mind and a creative mind and wanted to mix the two. Massage therapy was the perfect blend for me," Richardson says.

Richardson is the owner of Balance Studio, in the Orleans East Building in Flowood, and is certified in both human and canine-massage therapy. Although she holds a canine massage certificationthe only one in the State of Mississippi on record, she saysshe has had to suspend operations of this part of her business, known as Canine Comforts. She is currently working with the State Board of Massage Therapy to bring this part of her practice in line with state law, which requires that a veterinarian be on the premises when Richardson works on a canine patient.

She considers her clients, human and canine, as part of her family, and says that she "goes on a search-and-destroy mission when serving each client to make them as comfortable as they can be."

You will find no white walls in her office, instead orange and aqua blue which Richardson believes makes for a relaxing atmosphere. Her philosophy of comfort helped Richardson to be voted one of the city's best massage therapists in the Jackson Free Press' Best of Jackson awards this year. And she would love to move to Jackson one day. Her love for the arts makes her yearn for a place in Fondren, not only to work, but to live as well. She has many friends in Fondren and would love to be closer to them and take advantage of all the area offers within walking distance.

In addition to having two massage certifications, Richardson enjoys being in the kitchen and cooking by not following recipes. Because her boyfriend, Fernando, is of Puerto Rican descent, she recently learned to salsa dance for his sister's wedding. She refers to skydiving as her relaxation activity. Before a shoulder injury, she jumped with the Gold Coast Skydiving Team twice a month and is anxious to jump again soon.