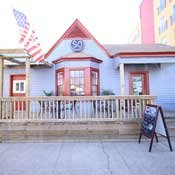 Sneaky Beans Coffee Shop is the site of the Aug. 27 outdoor music fest.

If you are planning on driving around the Fondren area Aug. 27, you may want to think of an alternate route instead of North State Street. The street will be closed from Duling Avenue to Fondren Place to make room for two stages that will host live music during Sneaky Fest.

The event is happening in front of Sneaky Beans, a coffee shop and music venue at 2914 N. State St. The daylong festival will include a children's play area in the back parking lot of the Bean, plenty of local musicians playing on the two stages, vendors selling local art, some of the finest local food and plenty of ice-cold beer.

The Seventh Annual Facial Hair Fashion Show will be held in conjunction with Sneaky Fest. A group of local beard enthusiasts will compete on one of the stages. Judges will rate contestants on sweetness of the beard, character-fitting nature of the beard and crowd reaction. To participate in the Facial Hair Fashion Show, email Baskin Jones at {encode="[email protected]" title="[email protected]"}.

To be a sponsor for SneakyFest, or if you're interested in performing, send an email to Byron Knight at [e-mail missing]. Follow Sneaky Fest on twitter @sneakyfest for the latest news on bands, sponsors and other announcements.