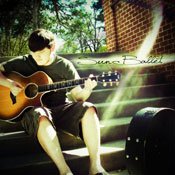 Micah Smith is doing something many want to do. He has shut up, and he has written. He is following his dream. This self-taught guitarist-singer-songwriter is becoming what many adults dream about—a star. He moves people—not in the sense of furniture— but in the realm of telling stories that matter through his writing and music.

Smith learned guitar on an acoustic bass, just because. He learned on the acoustic guitar because it would give him more opportunity to write.

"There are just not enough chances to write as a bassist," he says. "I just want to tell stories with my writing in music that I feel is not offered out there right now."

Majoring in English with an emphasis in writing at Mississippi College, Smith is tailoring himself to become a poet with music as a backdrop. To date, he has written 47 songs.

Smith, 20, is a writer who puts his words to music to inspire people, something he learned from Billy Joel, Elton John and others who write from their souls.

"My music is hard to describe. It's mellow pop and not loud. People usually say the louder the better, but I don't want my message to be clouded by the noise," Smith says. Instead, it's named Sun Ballet.

He got the idea watching the sun set over the ocean. The play of light on water mesmerized him.

"I named my music Sun Ballet because I usually have others performing with me at the same venue. I don't want it to be about Micah Smith," he says. "A title for the type of music allows it to be more than about just Micah Smith."

Smith is learning to read music with the anticipation of using a full orchestra behind his guitar and voice at some point. Although he may choose to perform with others on the same night, he is a soloist at heart and usually doesn't play with anyone else on the ticket. Smith has been in bands of all types from the typical pop cover band to a heavy metal band where he played bass.

"Bands can be messy. I am not a person who wants to rely on others more than I have to rely on myself," he says. "I have had good experiences in bands, but I like playing my own music that means something to me."

Smith has not released an album, yet, and admits that the only recordings he has compiled is the "stuff that friends have done." However, listeners gave him a nice reception while playing "every Cups coffee shop in the state of Mississippi and twice at Sneaky Beans."

And bigger things are in store for Smith and a career in music.

"If I could just release one album I would be happy. It is a similar goal to what all musicians have," Smith
says. "I want my music to be heard and enjoyed. And just to know that someone else out there likes it would satisfy me."

Smith cannot see a future in any career without music. "I am a writer, but I cannot see myself writing the news all day long. There has to be music in my life."