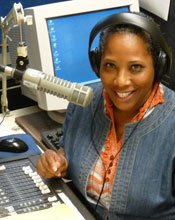 Gina Carter-Simmers, 41, hasn't always dug jazz. But after 20 years in working for public broadcasting, she has found a tune of her own as the general manager at WJSU.

WJSU, which attracts 30,000 listeners, was the first jazz radio station Carter-Simmers worked for, and she claims the station gave her an appreciation for the music genre. "I never thought I would appreciate jazz. But I got here and turned on my radio, and it took me to a different world," she says.

As the station's general manager, Carter-Simmers spends most of her day programming and fundraising. She is responsible for organizing the Battle of the Saxes, an annual event held at Jackson State University to promote and appreciation for jazz for all ages. She also works with JSU students helping them prepare to be on air. With only a five-person team, Carter-Simmers keeps busy. "I have my hands in everything," she says.

Born in Tuskegee, Ala., Carter-Simmers graduated from the University of Alabama with a degree in public relations and was hired as a promotions assistant for the school's public radio station, WUAL. She eventually began producing for the station.

"I tried to learn as much as I could," she says. "I was 22 when I was introduced to public radio, and I began to love it. Public radio plays music that otherwise would not be heard, like jazz. It keeps the arts alive," Carter-Simmers says.

"There's no support like the support from your family. My family is a major part of my success," she says.

During a break in her career, Carter-Simmers took time off to be with family. She became active in the Tuskegee chapter of The Order of Eastern Star, a Masonic organization. Her mother and sister are the founders of the chapter in Tuskegee.

"Everything we do in The Order of Eastern Star is based on religious beliefs and community service. A member of any faith can join, but you must be nominated into the group," she says.

After a 10-month sabbatical, Carter-Simmers was ready to go back into the working world. She contacted her first boss from WUAL, Anthony Dean, who was working in Jackson at WJSU. He informed her about an opening at the station. Within a month, she was in Jackson.

"It's been a great experience living in Jackson," she says. Carter-Simmers met her husband in the city, and feels grateful to work at WJSU where the resources of the university are accessible.