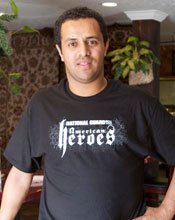 Born in Ethiopia to an Ethiopian mother and an Arabic father, Yosef Ali, 34, was given his name to honor both religions of his family. Ali spent his childhood living in Ethiopia and Saudi Arabia, where his father worked as an engineer. He moved to the States in 1995, and settled in California where he had family.

College and soccera sport he loved to play in Ethiopia and Saudi Arabiabrought Ali to Mississippi. He attended Mary Holmes College in West Point, Miss., and finished his degree in physics at Bethel College in McKenzie, Tenn., playing soccer for both schools. Ali moved back to Mississippi to earn his master's degree in hazardous material management at Jackson State University.

While at school, Ali began to cultivate his passion for cooking. During his last year at JSU, he divided his time between his studies in Jackson and a friend's restaurant in Birmingham called Al's Deli. At Al's Deli he learned to cook from his friend Abu Seed.

Ali believed Jackson needed more options for restaurants, and in 2004 he opened Aladdin in the heart of Fondren. Open every day of the week, guests can usually find Ali cooking in the kitchen or greeting guests on the front porch of his restaurant. His friendly demeanor and gracious hospitality compliment Ali's talent as a chef. He is genuinely excited to see each guest as they walk through the door.

"(Jackson) kind of reminds me of back home, I promise you, like Ethiopia," he says. "People are really nice here. You see a lot of families, like on the weekends people get together here. The same thing with back home: We all gathered on the weekends. That's what I like about it."

Aladdin's setup is home-like, with a large nook with chaises and plush pillows that give larger dining groups the opportunity to lounge as they eat. The restaurant also periodically hosts belly dancers.

For newcomers to his restaurant, Ali insists you try any dish with lamb. "Here (in Jackson) lamb is not that popular, so when people come they should try lamb. It's very good." And of course, the hummus is sublime.

Last year, Ali opened a second location in Flowood, and next door to the Fondren restaurant, Aladdin Grocery sells everything the restaurant serves and more. In the future, Ali says he would like to expand Aladdin's menu to serve more traditional Arabic meals including various pasta dishes, pizzas seasoned with Mediterranean spices, kushari and couscous.

"I really like what I do and I want to get better," he says.

I would LOVE more couscous dishes!

Man, their falafel is good.

Aladdin is fantastic... I've been going there since 2005 and it was my first experience with Mediterranean food. I've seen Yosef Ali there quite a few times but never knew his name, or that the business was his venture. Good on him!