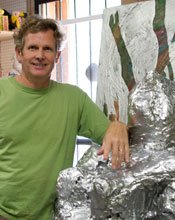 Richard McKey, 55, didn't know he was destined to be an artist. Born in Starkville, McKey moved to Jackson in the second grade. On a path similar to Van Gogh's, McKey first studied pre-ministry at Belhaven College. Halfway through school he decided to pursue his own business and began a career as a cabinet-maker. Eventually, he created his own construction company and built homes.

In his 30s, McKey returned to Belhaven College to study art history and art theory. Off campus, McKey studied under professor Bob Pennebaker in Pennebaker's private studio. "He was a huge influence on me, he taught me how to draw," McKey says. About 10 years later, McKey closed his construction business to focus on becoming a full-time artist.

McKey opened his studio six years ago on State Street. Today it is easily recognized by the mammoth-sized Obama head that sits to the left of the building. "Obama" was constructed right before the 2008 presidential election. McKey enjoys the attention the stuffed head receives, especially when people take pictures besides it.

The artist also opened a new gallery on Duling Street. It is important to him to be involved with the growing arts district in Fondren. Every inch of the gallery proudly displays artwork by McKey and other local artists.

McKey's excitement is contagious. He laughs often, remarking how much he loves what he is doing. As he walks around his new space, McKey points out the 14-foot ceilings. "I love the light in this room," he says.

The space is filled with ink and watercolor, portraits of cats and horses, abstract faces and sculptures of men made from dollar bills. "Whenever I walk out on to the street, there's some artists yelling, 'Let's do this together.' It pumps me up, it's fun," he says.

McKey finds inspiration for his work in other pictures. "My wife is always on me because I tear out the pictures (from her magazines)," he says. What he creates in his studio varies, depending on his mood. "Some days I'll go in my studio, and I'll just have a strong desire to do abstracts. If I try to do something else that day, it doesn't work."

All together, McKey has about 50 pieces of commissioned art in commercial buildings on Highland Colony Parkway. His work can be seen all over Jackson, such as his two painted figures that greet pedestrians in downtown Fondren and in Basil's downtown. Today he is focusing most of his time on the gallery, "I am really excited about meeting other artists. ... It's going to be fun to pull some of this talent out (from Jackson)," he says.