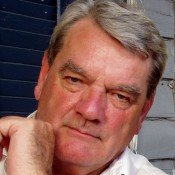 A knife fight broke out at a Monday book-signing for Holocaust revisionist David Irving in Florida. Two audience members battled it out near a crowd of guests at the author's lecture at the Ritz-Carlton, Manalpan, near Palm Beach. Police there identified one of the men as a white supremacist from West Palm Beach.

Irving said he was in the middle of his speech when the ruckus began outside the meeting room.

"There were some incorrigible types in the audience who had a feud going on over some woman going back years," said Irving, who appeared in Ridgeland this month during a tour for his latest book "Banged Up: Survival as a Political Prisoner in the 21st Century Europe," which is an account of his 2006 incarceration in Austria for promoting an alternative view of the Holocaust. The Austrian government issued an arrest warrant for Irving in 1989, and arrested him seven years later. He pleaded guilty to "trivializing" the Holocaust.

Irving still argues that Adolf Hitler had no knowledge of the mass murder of million of Jews during Hitler's reign, and disputes the 6 million Jewish murders attributed to the Nazis, arguing that the figure is closer to 3 million.

The anti-Defamation League and the American Gathering of Holocaust Survivors and their Descendants heavily criticize Irving for his positions on history, and opponents regularly protest his appearances. American Express even opted to boycott purchases of Irving's books.

Despite the strong emotions Irving generates, he says he has never suffered violence of this caliber at any of his book-signings in nearly 30 years.

"Unfortunately, these unpleasant people got in as gate-crashers. One, the person attacked, was a genuine guest on our guest list, but none of the people mentioned in the newspapers as being his attackers were on our guest list," Irving said.

Manalapan police identified two combatants as Lake Worth resident Christopher Nachtman and West Palm Beach resident John Kopko. Police report that Kopko has a criminal record for assault and is a known white supremacist who tried to force the county's library to buy Nazi magazines and literature.

Elan Steinberg, a vice president of The American Gathering of Jewish Holocaust Survivors and Their Descendants, said he was not staggered by the mentality of Irving's audience.

"It doesn't surprise me that violence follows wherever David Irving goes," Steinberg said.

Irving said he has notified the guest who allowed in the attacker that he is no longer welcome at Irving's functions. He also barred the person attacked from any future participation, allegedly because the victim "arrived prepared for something, because he was apparently carrying knives and a gun according to the newspapers and a police statement," Irving said. "The person who was attacked was on the guest list, and he was the one carrying weapons, which is quite unacceptable to me."

Well if one must engage ones self in a knife fight at least one can now engage in same at "The Ritz". And only the best cutlery will do.

Isn't that just like a Holocaust denier? To bring a knife to a gunfight? (apologies to Sean Connery)