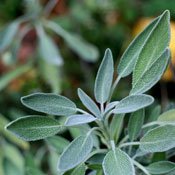 Thanksgiving turkey wouldn't be the same without the peppery, somewhat astringent flavor of sage. It's used in poultry seasoning and stuffing for holiday meals, but plenty of good cooks don't know what to do with this velvet-leaf herb outside cornbread dressing and the roast turkey behemoth of the holiday season.

Sage is an evergreen plant native to the Mediterranean, where it was cultivated as a medicinal super-herb. Among many other uses, ancient civilizations believed the herb could ward off the plague, break fever, draw venom from snakebites and cure female infertility. Sage's botanical name stems from Latin's "salvare," to save, and its healing properties were so highly regarded, herbal compendiums sometimes refer to it as Salvia salvatrix, "sage the savior." As a culinary herb, sage is a workhorse. It is an assertive topnote in American breakfast sausage, a marinade staple for Middle Eastern mutton, and Italians deep fry the pungent sage leaves to top salads and pasta.

Sage leaves can withstand high heat and long cooking times, making it a perfect aromatic for stewing or braising tougher cuts of lamb and pork. A few fresh leaves of sage and a creamy havarti can turn your next grilled cheese into a sophisticated affair. Toss a plate of wilted greens and winter squash ravioli with sage-infused brown butter, and top with crispy leaves. Whatever you do, don't leave your pot of sage forlorn and unloved until next November.