In the Kitchen with Pat and Robert | Jackson Free Press | Jackson, MS

In the Kitchen with Pat and Robert 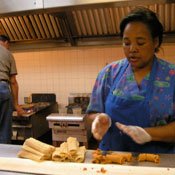 In the kitchen with the Mosleys at Tony's Tamales: Pat wraps tamales, while Robert oversees the cooking.

It's 6 o'clock on a Wednesday evening, and a steady stream of cars is queued at the drive-up window at Tony's Tamales. Robert Mosley is leaning over a microphone, running the register and taking customers' orders in rapid-fire. His wife, Pat, is eavesdropping and already in motion, packing the orders faster than he can call them back.

"I love to run him into the ground," she tells me in an exaggerated whisper, her face splitting into a mischievous grin. Robert shakes his head as he takes the bag, his eyes twinkling. He barely has time to take the bag before the bell chimes again, signaling another customer's arrival.

It's been 28 years since Robert made his first batch of tamalesaround 15 dozenin the Mosley's home kitchen. The Greenville native was out of work, and turned to his hometown favorite method of pulling in cash: tamales.

"This trade is self-taught," he says.

While he did turn to life-long friend and Greenville native Arthur Rankin for initial advice, he honed his skills and recipe through trial and error. He made the first tamales by hand in the Mosley home kitchen, plying friends and neighbors with tamales in exchange for feedback. He opened his first tamale stand, hauling tamales to the appropriately named Delta Drive (now Medgar Evers Boulevard). He named the business after his brother Tony because "Robert's Tamales" didn't roll off the tongue.

As the business grew, Tony's expanded by necessity to a location with its own kitchen on Livingston Road: The Mosley home kitchens appliances had worn out, giving their lives in service to hungry Jacksonians. Eventually, Pat left her career in the medical profession to join Robert in the kitchen.

Mosley's recipe changed with the times, but there are some things Robert wasn't willing to sacrifice. "We started out with beef, but from day one, we always wanted to make a healthy product. A lot more people are health conscious now, and the turkey's a clean meat, not a lot of fat. What we don't do is cut back on the spices and seasoning. When you make tamales, you know what's missing. We've never cut back on the spices, never tried to cut corners on ingredients. Once you get to cutting here, cutting there; you lose the original flavor."

Today, they have two locations in Jackson: 230 West Woodrow Wilson Ave. and 228 E. Capitol St. They get a great many mail orders for tamalesespecially around the holidays when folks are homesickand are hoping to expand into wholesale ventures. On the weeks they roll tamales, they produce 600 to 800 dozen, freezing them until they're needed. Pat insists the freezing process allows the tamales to stay as fresh as possible while allowing the flavors to mature.

"If you can't eat them here, buy them frozen and steam them at home: it's as close to fresh as you'll get," she says. When she opens the freezer to show me their stores, the heavenly aroma causes my knees to buckle. For a fleeting moment, I want to curl up inside a working deep-freeze.

I confess I'd never eaten a tamale before moving to Mississippi, and Tony's are my first love. Tony's Tamales is a Jackson institution, and some of our favorite tamales, on or off the trail. In addition to their mightily spiced tamales, they also have a beautifully balanced gumbo, excellent dumplings and homemade cakes.

Tony's began making vegetarian black-bean tamales in 2002, and Robert is investigating making a tamale with soy or other textured vegetable protein. For those of you who eat strictly local/organic meat or hunt for the meat you eat, don't despair. Robert will gladly make tamales out of your processed meat. He's made tamales out of duck, black bear, elk and venison meat, and wants the world to know he's interested in making some wild boar tamales one day.

While Robert is wry and understated, Pat is obviously the public-relations end of the partnership. She is tireless, chatting up customers and dispensing advice at the drive-through window. In between customers, she tells me: "I didn't know what a tamale was until I met him, he's the tamale man. But now, I can tell you almost everything there is to know about tamales."

I tell Pat a little about what I learned about traditional Mexican tamales before this endeavor. When I tell her about the Mexican superstition that says tamales need music or they won't cook to fluffy perfection, she breaks in with great authority: "Well, I don't know what kind of music those Mexican grannies play, but here in Mississippi we play the blues for our tamales."