Anatomy of a Tamale 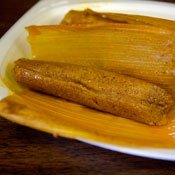 Tamales are an ancient food, the word stemming from tamalii, the Aztec language's term for "wrapped food." The Mississippi hot tamale is a different beast than its ancestor, the Mexican tamal. Its origin is steeped in speculation, but the best guess is that Mexican migratory workers brought them to Mississippi and passed on recipes to their curious and envious African American coworkers.

The Mexican recipes were modified to use readily available ingredients and to suit a different culture's palate. As is the way with most working-class food, the economical ingredients transcend their humble roots through slow-cooking: tougher cuts of meat become tender; cornmeal is infused with flavor from both the shuck and the deeply spiced filling, and steaming or simmering liquid adds another layer of flavor. The tough question remains: What definitively makes a tamal a Mississippi hot tamale?

There's no easy answer to this. We sampled tamales from all over the Mississippi Delta, and I'm still not quite sure if I can answer the question. The people we met along the trail had strong opinions about what makes or breaks a recipe. Nearly everyone had a a strong sense of familialor at least hometownpride when it comes to tamales.

Casings: Unless you're eating tamales smothered in chili and cheese or the fabled deep-fried tamale, it's likely your tamales will come tied neatly in bundles of three and wrapped in the traditional corn shuck. Other wrapping options include parchment paper, rice paper or wax paper. Tamale expert John T. Edge even writes on tamaletrail.com that he's seen tamale wrappers fashioned out of coffee filters. Wax paper will make the finest ingredients taste like a tamale-scented candle, and the words "coffee filter tamale" are nightmarish in concept. Silicone-impregnated parchment won't leave funky flavors into the tamales, but it doesn't do them any favors, either. Corn husks are sturdy, semi-permeable and impart another layer of corn-flavor to the tamales lucky enough to be cooked in them.

Filling: Pork is traditional, but we ate a lot of beef tamales in the Delta. I was surprised because pulled pork shoulder is a Mississippi staple, and it's perfect tamale fodder. Chicken, turkey and venison are common fillings, and we occasionally see gourmet fillings from the Belhaven Market vendors here in Jackson. Whether the filling is ground, shredded or chipped, the key is to have a heavy hand with the spicing, as the dough itself is rather plain.

Masa or Cornmeal? While Mexican tamales rely on masa de harina, hot tamales rely on the readily available and familiar cornmeal. Depending on the grind of the meal and the cooking method, tamale dough can be thick and toothsome with a robust corn flavor or smooth like polenta or cornmeal pudding. We gravitated toward tamales with some chewiness in the crust, but the silkier tamales were excellent breakfast fare.

Steam or Simmer? Many of the tamales we ate were simmered in a flavorful broth with a touch of oil to keep tamales from sticking. These tamales, with few exceptions, had little textural difference between the cornmeal and the filling, and were lovely swimming in their broth, with crumbled crackers adding interest while soaking up the potent broth. Steamed tamales held their shape more readily, and our favorites on the trail were smeared in a crimson spice rub.