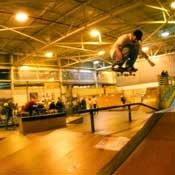 A skater does an ollie transfer at Doc*36 Skatepark

The clang and clatter of skateboard wheels against wooden slabs echo through a long corridor and emerge outside dock 36 of the Jackson Enterprise Center in South Jackson. Inside, colorful graffiti makes the warehouse walls pop, and small American flags break up the spaces between the lines of skateboarding brand banners. A chain-link fence separates the few skaters and their playground from a picnic area where parents sit watching their sons ollie and kick flip up and down curving transitions.

Bobby and Cindy Shanks opened their first skatepark in 2000 near the Jackson International Airport in Pearl. In April 2003, they moved it to dock 36 and named it Doc*36 Skatepark. Just looking at the couple, you wouldn't guess that they operate a warehouse skatepark—Bobby has a military background, for instance, and he looks every bit of the part. But as you spend more time in the park, it becomes evident that the couple thrives there just as much as the skaters do.

Bobby, a Brandon native, grew up skating around the Jackson metro just as "something to do."

"I did it for fun," Bobby says. "That's what these kids do now—they just ride for fun. It's something to do with their time other than going out and getting into trouble."

After serving in the military right out of high school, Bobby worked for a tradeshow company in Atlanta, where one of his friends opened a skatepark. When the couple moved back to Jackson, it seemed like a good idea to open one here. Bobby and Cindy traveled to skateparks across the country to get ideas, and Bob eventually designed and built every aspect of Doc*36.

The 10,000-square-foot space sees a couple thousand skaters every year, the Shanks say, anywhere from 4 years old to 64. The park hosts skating contests, and pulls in a few celebrity pro skaters, too. Most recently, Rob Dyrdek and Christopher "Big Black" Boykin—of the MTV show "Rob and Big"—made an appearance at the park.

One of the major elements of the skatepark, Cindy says, is that "kids can act like kids." The Shanks have seen many kids through the years, many who are grown now.