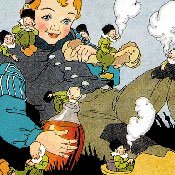 • In the future, Leprechauns will serve you Irish Flying Carbombs.

• The Keebler Elf is not a leprechaun. Neither is Snap, Crackle nor Pop.

• Danny DeVitoalso not a leprechaun. I've asked him plenty of times.

• When I was 8 years old, I bought a box of Lucky Charms and swallowed the prize. Does that sound lucky to you?

• A pot of gold is worth more than a pot of U.S. dollars due to its declining value. Invest NOW! (OK, we admit it. Cash4Gold.com is a corporate sponsor.)

• The leprechaun spotted in Mobile, Ala., was never found. Where the gold at? Give me the gold.

• Randy Newman sang about short people. He was not referring to leprechauns. Or was he?