Former DA Peters ‘Will Be Barred from Practicing Law' 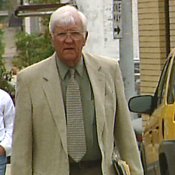 Former Hinds County District Attorney Ed Peters has turned in his law license to the Mississippi Bar Association. The Bar received Peters' resignation last week, but had to wait until the Mississippi Supreme Court opened its doors after the holidays to file Peters' "irrevocable resignation" with the court clerk. Bar General Counsel Adam Kilgore said that Peters surrendered his license after an unnamed party filed a complaint against him for unethical conduct.

"What's going on is a person filed a bar complaint against Mr. Peters alleging that he'd committed ethics violations. We went through the normal bar complaint process, and as part of that process Peters had chosen to submit his irrevocable resignation.  If the court accepts it, Peters will be barred from practicing law, and he'll never be able to reapply for reinstatement," Kilgore told the Jackson Free Press.

Kilgore added that Peters' filing of this resignation is, in essence, an admission of guilt regarding the underlying bar complaint. The organization may not reveal the nature or source of the ethics complaint against Peters, however, thanks to Rule 15 of the Mississippi Rules of Discipline, which "requires that the enumerated disciplinary agencies of the Supreme Court of Mississippi maintain the confidentiality of the details of the underlying disciplinary matter which gave rise to Mr. Peters' resignation," according to Kilgore.

Peters conveyed a sense of weariness in his notice, while acknowledging the pending disciplinary matter against him before the Committee on Professional Responsibility: "In view of my retirement and resignation, I do not desire to defend this matter," Peters wrote in his petition to the Bar (PDF/Folo).

Kilgore could not offer details on the disciplinary matter, but Peters is under investigation for his role in convicted attorney Dickie Scruggs' alleged scheme to bribe Hinds County Circuit Judge Bobby DeLaughter for a favorable decision in an attorney fee dispute before DeLaughter.

Convicted attorneys Joey Langston and Timothy Balducci recently testified that Scruggs offered $50,000 in cash to Peters and the promise of a federal judicial appointment to DeLaughter to entice the judge's favor in the case. Balducci even claimed he would share draft copies of potential decisions with the judge. DeLaughter did reach a decision in the 2006 case that favored Scruggs, although DeLaughterwho has since been removed from the bench pending the completion of the federal investigationhas admitted no guilt so far.

WLBT is reporting that beleaguered former Hinds County District Attorney Ed Peters has given up his law license:

Click here to read the JFP's past coverage of the controversial district attorney, whose name has also surfaced in many stories about Mayor Frank Melton and his past.

I'd hazard to guess that a whole new round of corruption drama is nearing. I'm glad: the whole damn thing needs to be cleaned out. It's remarkable how many people looked the other way for so many years. No wonder Mississippi and Jackson have been so hampered with the folks who have run things in these parts.

Oh what a tangled web we weave, When first we practise to deceive! - Sir Walter Scott

Maybe I've naive, but I am surprised he actually turned in his license. It's no secret he's been in controversy in the past- before, during, and after he was Hinds DA. I can only imagine what's about to come to the surface in the upcoming year...

Indeed. The insider poop has been that more federal stuff related to all this, without getting more specific, was to break right after new year's, so here we go. Also, Folo is posting documents re: Peters et al and has interesting chatter per usual, albeit mostly anonymous, so not exactly journalistic. They're great for courthouse documents, though. (Someone questioned the coincidence of Khayat stepping down just as Peters turned in his license, equating it to the, er, Lott-Scruggs coincidence. Take it what it's worth at this point: speculation.) Personally, I'm intrigued that Cynthia Stewart is Peters' attorney.

I thought that was interesting too. You'd think she'd be swamped getting ready for the (delayed AGAIN) trial with Recio...

Sophie, I would guess that it's part of a deal. Indeed on Peters' past controversy, as you and I well know, but it seems not enough people cared until these particular feds came calling. The Scruggs scandal has many tendrils, and they may well reach into many levels of Mississippi's society and history. On one level, it has amused me that the Scruggs thing reached into a place many powerful Jacksonians thought was sacred. Oh, and Folo is linking to our Cedric Willis story (hat tip), in which Brian Johnson detailed how supposed heroes Ed Peters and Bobby DeLaughter (for the distracting Beckwith prosecution) pushed away exculpatory evidence that would clear Cedric, instead sending him to prison, where he spent 12 years until the Innocence Project got him freed. My first exposure to Peters' past came during Melton research. I find it remarkable how popular this man was all those years, especially among North Jacksoners (although the reasons many liked him have become clearer to me). As recently as the last DA's race, Peters helped turn Faye Peterson (who dared to challenge members of his inner circle, not to mention him) out of office by openly supporting Robert Smith. The next month, the bottom fell out on the Scruggs scandal. Ah, the webs this state weaves. First step: paying attention to the obvious.

OK, I'm hearing that a certain someone, other than Peters, is pleading today. (Biting fist.) Trying to confirm now. Meantime, Patsy Brumfield is reporting the obvious: that Ed Peters' license move means he has pled to something serious.

I was just reading the comments under the Ledger's (late) Peters story today, and say that someone referenced this JFP story on the Peters' bribery allegation last year. I highly recommend clicking and reading through the comments; they are quite compelling, if I do say so myself. (They're not all by me, mind you!)

More in the Daily Mississippian about "Scruggs II."