'How We Got Over' | Jackson Free Press | Jackson, MS

'How We Got Over' 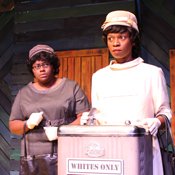 Nella Pettway (left), played by Sharon Miles, watches nervously as her sister Sadie, played by Tarra McGowan-Riggs, drinks from a "whites only" fountain.

Sadie Pettway's eyes grew wide as she inched closer toward the ominous water fountain at stage left. Her sister Nella stood anxiously behind her watching intently as Sadie pulled the lever and took a sip from the "whites only" fountain. "What's it taste like?" Nella asked.

Loving, living and quilting through three erasthe years 1939, 1965 and 2002the women of Gee's Bend are skilled quilters, but most of all, they are resilient fightersagainst circumstance and sometimes each other. Tarra McGowan-Riggs portrays Sadie, a youthful black woman who, during the Civil Rights Movement, finds hope and inspiration in the words of Martin Luther King Jr. and sets out to conquer obstacles in her own corner of the world. As a teenager, she is precocious and inquisitive, learning to read and quilt before her sister Nella. That curiosity later leads her to the King march in Selma, Ala., where she learns that freedom has a price.

Nella is everything Sadie is not: Nella is single, while Sadie marries young; Nella is lazy, while Sadie is independent; Sadie can read eloquently, while Nella struggles with her words. Yet, Nella's character, played by Sharon Miles, is so compelling that she often rivals Sadie's in the play. Nella's strength is her loyalty, and despite putting up a strong exterior, the audience sees glimpses of her fragility throughout the play.

Opening each scene with a different old spiritual song, the play highlights the progression of the three women. It also, however, follows the progression of blacks, subtly drawing similarities to the Israelites of the Bible. For example, the first scene of the play shows Sadie by the river as Nella and Alice sing "How We Got Over" in the background. Sadie speaks of a terrifying dream in which she finds herself in the water like baby Moses. That dream reoccurs throughout the play, and in the end, Sadie triumphs over her fear of the water to register to vote.

The river separating the all-black community of Gee's Bend from neighboring Camden is as much a character in the novel as the Pettway women. A ferry runs between the two towns until the height of the civil-rights era when Camden docked the ferry to deter blacks from riding over to register to vote. Sadie is one of the first blacks to register before the ferry stops running. "That means I matter," Sadie says referring to her voter registration card. After the ferry reopens nearly 30 years later, she finds freedom once again as she travels across it to get to New York City where she see her quilts hanging in a museum.

Riggs is charmingly genuine in her portrayal of Sadie. Each emotion she emits is clear and distinguishable, ranging from intense anger to playful coyness. And it's not a stretch to see her play a 15-year-old school girl as well as an elderly grandmother. Miles is hilarious as Nella, feeding of the energy of the audience as she delivers laugh-out-loud lines about the invention of the golf tee and advances from older men. The relationship between Nella and Sadie is competitive yet tender, and Riggs and Miles portray this well.

Winters-Anderson has a beautiful soprano voicewhich matches Miles' strong alto welland her versatility shows as she portrays two generations of Pettway women, first as Alice, then as Sadie's daughter Asia.

The set of "Gee's Bend" is simple, leaving room for audience members to fill in visual holes for themselves. A one-dimensional log cabin front, lit with blues, indigos and greens, sets the scene for the living room and front and rear of the house, while a wide platform that takes up much of the stage becomes a picnic-perfect meadow, a bedroom, cotton field and more. Using only a few propsmostly furniture, quilts and clothingthe cast creates a richly textured story that is much more about fear and love than quilts, though the works of art help document each momentous event in the lives of its quilters.

The real quilters of Gee's Bend will be present at the Feb. 4 and 5 performances of "Gee's Bend," which runs at New Stage Theatre through Feb. 8. Tickets are $22 with various discounts available. Call 601-948-3533 for more info.