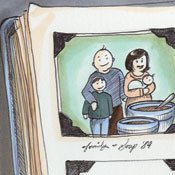 My grandma, may she rest in peace, made the greatest chicken soup I've ever had. Most of the Jewish people I know believe their grandmother's soup is the best, and I believe them. To argue over whose soup is better is an impossible battle because Jewish chicken soup, like all soul food, is not just food. It's everything that makes life come together; it's the stories I was told while eating the soup, the love I felt when my grandmother made the soup specifically for my nourishment. It's the taste of countries far away that hold pieces of my history; it's the immigrant mentality (add a meat bone for flavor, save the chicken fat for another meal) and the words ingrained in Yiddish in the kitchen.

The South is known for its soul food. And in the land of fried chicken, collard greens and grits, I hold strong to my heritage's soul food. Last month, the Beth Israel Sisterhood held its 42nd annual bazaar. Jackson, a place far away from my family and culture, was offering to bring pieces of my tradition to the South. Among the dishes were familiar names I grew up with such as blintz (a thin pancake stuffed with cheeses); kugel (a sweet noodle casserole); knishes (fried dough stuffed with potato or kasha); tzimmes (cooked vegetables or fruits often simmered with meat); and of course chicken soup with matzo balls.

Everyone at my table had an opinion of the food: "The brisket is so tender"; "I never thought to make tzimmes with cherries"; "My mother makes a better matzo ball"; "My grandmother loved stuffed cabbage." Most of the people at the bazaar were not Jewish, and everyone wanted the chance to share their own narratives with the food we were enjoying.

Place the chicken breasts into a large pot. (If using a whole chicken, place chicken in pot with the breast side down.) Fill with enough cold water to cover the chicken, leave enough room at the top for the soup to boil. Bring to a boil, watching carefully to not let soup boil over. Chicken fat will begin to emerge; skim fat out of broth.

After about 20 minutes or until most fat has been skimmed out, add the onion, carrot, parsnip, celery, garlic, bouillon cups and dill. Cook partially covered over medium heat for 2 hours.

(If using a whole chicken: After an hour, remove the bones and skin, and cut chicken into pieces. Return to the soup, or leave soup as a broth, and reserve the chicken for other uses.)

After removing chicken, pour in lentils. Cook for about an hour or longer (the longer the soup cooks, the greater the taste.)