‘Fell Off the Turnip Truck' 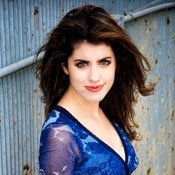 After a few moments of talking to Georgia Thomas, one can see the cute, quirky southern girl hiding behind her strong, sultry voice. She giggles in an endearing way, which—when she's really tickled—ends in a quiet asthmatic fade-out, and she loves her family and God. "I've always wanted it all," she says of her music and family life. "And I got it."

Thomas had a natural talent for singing at a young age, but struggled early on to find her niche. Growing up in 1980s Jackson with a Grammy-nominated songwriter father, Cliff Thomas, the 34-year-old songstress says she listened to a lot of alternative and pop music, but when it came time to sing along, she struggled.

"I'd always try to sing with those girls, but I couldn't," Thomas says of pop singers. "They could sing up in the barracks."

While studying biology at Mississippi State University, however, Thomas discovered country music, and the spirited alto began to identify with singer-songwriters like Mary Chapin Carpenter and Bonnie Raitt. "I felt like they were so sincere," she says.

Thomas says she's "always been good at two things: science and music." So after she graduated from MSU in 1996 with her biology education degree, she decided to try her luck at music full-time. She packed her bags and headed to Nashville, where Thomas says it was as if she just "fell off the turnip truck."

"It was very humbling," Thomas says. "Nobody knows who you are; it was very difficult for me."

Wanting to learn all she could about the music business, Thomas waited tables on Music Row, and later began writing songs like her father. Teaming up with other Nashville songwriters, Thomas still writes two songs a week on average, but her singing career has recently begun to vie for her attention.

As her catalogue of songs began to build, a friend suggested that she put together an album. Thomas had regularly been playing an acoustic set in small venues around like the Bluebird Café, but she had been primarily writing songs for other people to sing. But making a record sounded enticing.

"I needed something to sell at my shows," she says. "But then it became bigger than I expected."

Thomas released her self-titled album last fall, and each song covers new territory. The opening track, "Ash and Embers," is the monologue of a scorned woman who is hell-bent on getting away from her cheating man and leaving nothing behind but ashes and embers—literally. "That's totally fictional," she says, laughing, as she explains how she writes songs. Some, like "Ashes and Embers," spring from common country music themes like betrayal. Many of the songs that Thomas writes, though, are based on events in her own life.

Thomas wrote the song "Angel on the Ground," a tender ballad featuring piano and bare production, about her husband. "When you can't find your wings / when you're crying on your knees / when you feel your soul won't sing / when you're hanging by a string … I want to be your angel on the ground," Thomas sings. Her father's battle with cancer inspired her to write the song. "It was hard to see him hurt like that," she says. "I wrote ("Angels on the Ground") thinking, ‘What if it were me and my husband going through that?'"

Although she's content doing both now, Thomas says she's unsure of whether she's meant to do singing or songwriting full-time. "I've always said I'll take what comes first," Thomas says. "I feel like God has created a path for me in music, whether it's in songwriting or as an artist."

In the meantime, Thomas is busily working to get her album to the masses and will perform her first show back home in Jackson at Hal & Mal's April 4. The show starts at 8 p.m.; no cover. Thomas will also be on the air with MISS 103 the morning of April 3.