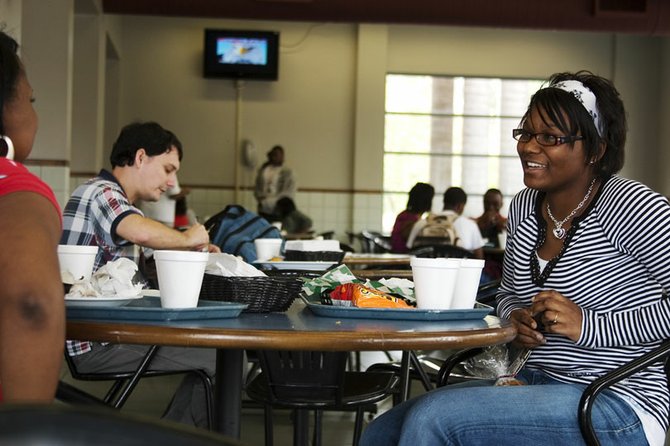 Hinds Community College student Brandy Swaggard feels her career in health care is safe, but expects the next government to do more to help the people of this nation. Photo by M.P. Heindl

The financial crisis is blowing toward Jackson, and the Millennial generationpeople ages 18 through 29is taking notice.

"Everybody is getting scared," said David Spencer, a pharmaceutical technology major at Hinds County Community College. "What was that on CNN? When they said that all those seniors in college, when they get out, aren't going to have any place to go. I don't want to get stuck working in Burger King."

Spencer is seemingly confident that he and other Millennials have it all figured out, but doubt still looms.

"By all estimates, you're looking at 2009 before (the economy) starts gaining again. That's kind of when you're going to get a feel of how much of a hit retirement accounts have taken and who has weathered the storm," said Ross Tucker, senior vice president of economic development at the Greater Jackson Chamber Partnership.

The Jackson metro is better off than most, better insulated against the bad credit markets because recession-proof government and education jobs dominate Jackson, followed by health care and traditional banking jobs. Large companies whose sales are hit by the crisis dominate jobs in many cities.

"We've actually done a great job on it," said Eric Clark, 25, a loan officer for Regions Bank, adding, however, that "the fact of the matter is my 401(k) is dipping every day."

But the job market has tightened in the last year, with Jackson's unemployment rate rising above the state's average rate. Notably, the Nissan plant has cut staff pay by 25 percent by reducing hours and letting contractors go.

"Short term, as far as the availability of jobs, it's certainly not going to be as good now as it was 18 months ago, two years ago," said Howard L. McMillan Jr., dean of Millsaps College Else School of Management.

"If you were bright, talented, capable, had a good skill, you could get a job. Right now, I'm not as sure that is the case. And that may be true for some time."

The largest trend facing Millennials will be the massive retirement of the Baby Boomers, expected to hit Jackson in the next five years. Shrinking 401(k)s and deteriorating nest eggs could extend this a few years longer. But for Jackson, Tucker says not to worry.

"You have a lot of governmental jobs that are going to be changing hands, and you have state retirement that is backed by the full part of the state, so those folks will be able to retire," he said. "And as Baby Boomers age, the need for health care will grow."

McMillan agreed that government will be a major employer of Millennials, and added: "If we get a Democratic governorship (in the future), things will change significantly."

"One of the things is to get the out-of-control spending in Washington back under control. The debt is killing the economy," he said. "By doing that, we get the economy stronger, the value of the dollar goes back up, and then we're able to create jobs again."

The Millennials are, on the whole, the most formally schooled in American history. This is good in an age of globalization where many countries are growing faster than the U.S., expanding the available job market from Jackson to China.

"We have a student right now who is interning, as a part of the MBA program ... in Liechtenstein," said Tonya Craft, director of the Career Center at Millsaps. "Now he's from Houston, Texas, went to a school in Mississippi, and his goal is to work for a bank in Spain."

But education is expensive, which leads to Millennials' second moniker: Generation Debt. College tuition has soared much faster than wages have kept up, and paying this money back is difficult when compounded by another trend: studying in low-paying fields that have a social or artistic mission.

"Good money can be made in those 'hands-on' trades for Millennials, but I am seeing more sociology, anthropology, psychology (and) non-profit," Craft said.

"My parents always told me, do what I love as long as I could make a living out of it," said Lori Thorpe, a 20-year-old theater major at Hinds Community College. "And that's pretty much how our generation was told. You don't do something for the money; you do it because you enjoy doing it."

Consequently, college officials expect to see a significant increase in graduate enrollment: Students who cannot find work in their field fall back on more education, and many young people are using unpaid internships as a way to get their foot in the door.

But this excludes the other half of the Millennial generation that doesn't have a higher education, and will suffer the most in this recession.

"I think it's bleak for those kids.  There's so much technology involved in every job now; you've got to have a basic set of skills to be able to function," McMillan said. "If a kid drops out of high school, he's on welfare for the rest of his life. He's not going to be able to get a job."

"I think there's going to be a certain need of entry-level minimum-wage people, regardless, and these students will take that, and will be OK," he said. "This thing will pass. We've been through these before.

I think there's a real opportunity here for young people to reinvent how they make money. As a freelance graphic designer, I'm finding quite a bit of clients here in Jackson simply because there's been an absence for a long time of young creative professionals. It's more possible here than other places to keep your expenses really lean. Technology makes it possible for me to work from home, and meet clients at coffee shops. I feel ready to adapt quickly to changing market conditions because I can follow my own instincts, and I feel more secure because I'm not a line item on a corporation's budget. I think it'd be great if more skilled young professionals in Jackson found ways to go into practice for themselves. Try it out now while you're young, and before you have a mortgage, family, etc. for whom you're obligated to provide. (Also, being a little bit of a self-promoter helps! Please visit www.schwindamania.com to take a look at some of my design work.)

I think it'd be great if more skilled young professionals in Jackson found ways to go into practice for themselves. Try it out now while you're young, and before you have a mortgage, family, etc. for whom you're obligated to provide. Nice to hear from you, Darren. :) I believe that difficult times can stir up the creative entrepreneur in a person, and if Millenials can tap into that and make good use of their time and talents, there's no telling how successful the may become, especially after the economy is on the upswing again.