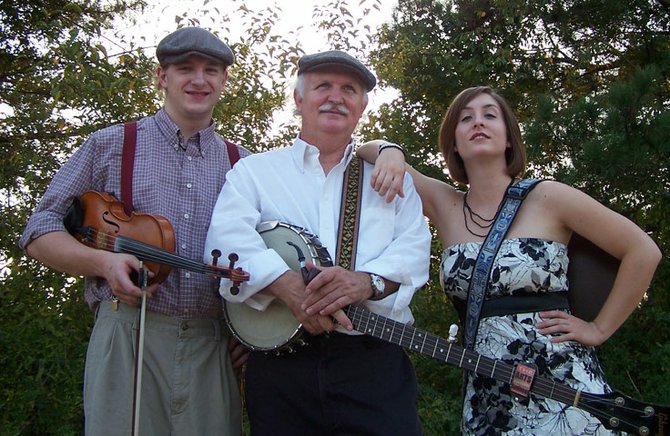 As the Dillonaires, Sherman Lee (center), Anna Lee and Andrew John Dillon show a Mississippi side of family folk music.

The Dillons are a musical family in the purest sense. As daughter Anna Lee puts it, her father Sherman Lee Dillon, 57, has raised seven kids on music, not only through his work as a musician and instrument craftsman, but also by imbuing in them a love for making music.

The Dillons started playing music together in the mid-'90s when Sherman Lee, already a veteran Mississippi musician of two decades, located instruments for his wife, his seven children and one son-in-law, forming a 10-member family folk band. The Dillon Family Band played at schools, churches and festivals around Mississippi until about 2004, when members' marriages, college and career moves dwindled the band's ranks.

Sherman Lee continued playing solo until his son, vocalist and fiddler Andrew John, and Anna Lee, who sings and plays guitar, started sitting in during his shows. Gradually, the trio became Sherman Lee Dillon and the Dillonaires. For Sherman Lee, it was a natural progression.

"Anna and Andrew were the only ones that really liked (performing)," Sherman Lee says. "It just made sense."

These three Dillons have been performing under the banner of The Dillonaires for the past two years since being signed in February 2007 by Massachusetts-based Wepecket Island Records to cut an album. With the September 2008 release of "Dirty, Dusty Road," the band is seeking audiences outside Mississippi.

The Dillonaires recently played the Taunton River Folk Festival, a benefit to help save the Taunton River watershed in Massachusetts. Given patriarch Sherman Lee's close involvement with the Mississippi Green Party, participation in environmental causes is a foundation of the band's philosophy.

"Environmentalism is definitely a passion of ours," Anna Lee says. "Particularly of my dad's." Sherman Lee has been the chief organizer of Jackson's Earth Day events for the past 15 years, and also ran for governor on the Green Party ticket in the 2003 race.

The Dillonaires have a following in Jackson and frequently play at Millsaps College, a particularly progressive school and one with which Anna Lee says the band has a long-standing relationship. Their new tour has been taking them further afield.

"We're pretty much touring every month for a week or two," Anna Lee says. "We're having a good time getting to see the country, getting to move around."

The Dillonaires' album is influenced by bluegrass and gospel, and of course, traditional folk music. Their songs represent a mixture of folk and bluegrass classics in addition to brand-new material. Anna Lee takes up vocal duties on the lovely old-style folk song "Henry and Polly," while the banjo gets put to good bluegrass use on the album-ender, "John Henry." In between, the Dillonaires pay homage to old-time churchgoing sensibilities in the a cappella "I Feel Like Traveling On."

Given their holistic approach to their album, you might expect that the Dillonaires aren't folk purists. Ask Sherman Lee, who sings and plays banjo and harmonica, about what is and what isn't folk music these days, and you get a pragmatic reply that reflects the state of flux in the genre.

"It's like a Rorschach ink-blot," he says. "Folks define it however they want to at the time."

Touring the country playing music can be a grueling task, and some might imagine it becomes even tougher when your bandmates are also your relatives. Sherman Lee, though, finds that touring with his children results in a creative experience where they are in tune with one another.

"All in all, we get along very well," he says. "Between the three of us, there is a mutual respect for one another. There is an awareness of each other's shortcomings as well as each other's strong suits."

Taking the touring schedule in stride, Andrew John laments that coming off the Massachusetts trip has a definite drawback.

"I have mid-terms tomorrow," the JSU music education major says.