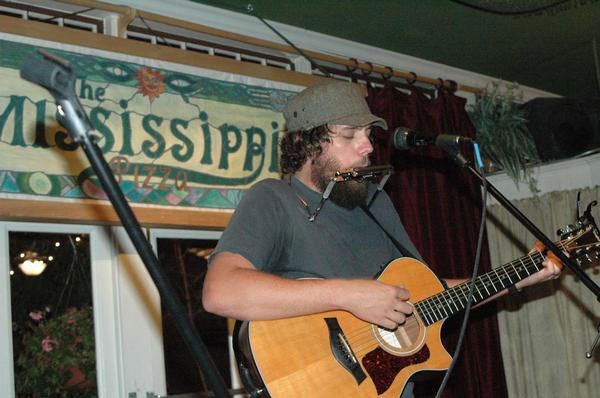 Jackson resident Johnny Bertram of Synthar plans to release an album and tour with his new band in December. Photo by Courtesy Johnny Bertram

West Coast transplant Johnny Bertram came to Jackson to help kids, but stayed to make music. Bertram is perhaps best known as the leader of indie synth-pop band Synthar, whose 2007 album "Evenings & Weekends" has been making some waves online. The 27-year-old Boise, Idaho, native called Portland, Ore., home for a number of years before non-profit work called him and his wife, Emily down to Jackson in May 2005.

Such a move֖from one of the centers of American indie culture (Stephen Malkmus and The Shins are just two of the bands that call Portland home) and political progressivism֖might seem a hard transition to make.

"The thing I like about the scene in Jackson is that it's not Portland, it's not Austin, Texasit's something that's still establishing itself, and it's not trying to be either one of those other places. Even though it's still up-and-coming, it's been here before, and it's been here the whole time," he said. Through his participation in Jackson's nascent scene, Bertram said he has come to appreciate the sense of community he found here.

It was within this new sense of place that Bertram found the idea for Synthar. Starting out as Bertram's side project, Synthar evolved over a couple years into a real band with a full-length album. "Evenings & Weekends" is a thoroughly modern record, not just in its musical sensibilities, but also in its production and distribution. Bertram is the only member of Synthar's quartet located in Jackson. Other members Matt Basinger, Andrew Best and Joel Hartse are in New York, Palo Alto, Calif. and Shaoxing, China, respectively. Their geographic disparity in membership necessitated use of the Internet to produce the album.

"We were spread out all over, but we wanted to make music together, and we decided to do the whole 'Internet band' thing," Bertram said. "Because we aren't all living together, we knew it wasn't necessarily something where we would play live shows; we hope to someday."

While trading bits and pieces of songs via the Internet allowed Synthar to make headway, band members did not compose the album entirely in isolation from one another. Best eventually made his way to Jackson along with his Moog synthesizer to put the finishing touches on "Evenings & Weekends."

In true indie fashion, the album's distribution has also been done from the bottom up.

The members of the band created the album's art and merchandise, including screen-printing all the album covers and T-shirts. CDs and digital distribution from the Synthar Web site had been going well, leading Bertram to try a new method of selling "Evenings & Weekends" via Internet startup noisetrade.com. Fans purchase the album on a pay-what-you-want model or get it free by telling three friends about the album.

After three years in Jackson, Bertram has found his niche in the arts community֖not just through his music, but also in One To One Studios, the not-for-profit arts collective he helped start in the Millsaps Avenue neighborhood. One To One, located at 121 Millsaps Ave., features an art gallery and performance space for live acts, as well as rooms where a number of artists live and produce their works. The collective, which holds regular, free art exhibitions and music shows, is supported by the artists and donations from patrons.

"Living down here and being a part of starting up One To One Studios has definitely put me in the mix," Bertram says. "There's lots of cool stuff going on that I wouldn't have noticed before when I was out of the loop."

In addition to a reinvigorated Synthar, Bertram is concentrating on releasing an album with his other band, The Mill Street Accident, around Christmas and expects to tour soon thereafter. More immediately, he is keeping busy with the One To One Studios Unplugged fundraiser on Aug. 30. Tyler Tadlock, Jamie Weems and Dent May will also play at the event. Fans can also catch Bertram at Martin's songwriter night Aug. 28.

For more information on Johnny Bertram, visit MySpace.com/JohnnyBertram and OneToOneStudios.org.