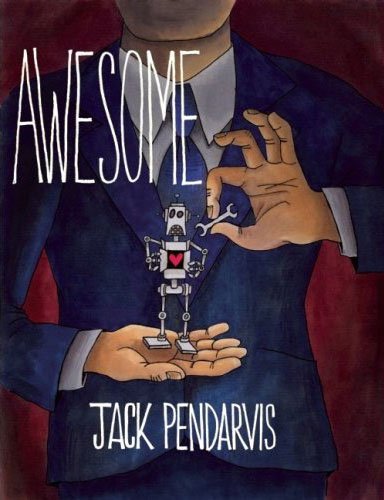 Acclaimed Alabama short-story writer and 2007–2008 Writer-in-Residence at the University of Mississippi, Jack Pendarvis has just published his first novel, "Awesome" (MacAdam Cage, 2008, $18). His previous two books, both anthologies of his short stories, were well reviewed by critics, and with "Awesome," Pendarvis is continuing his penchant for entertaining stories, albeit this time as a full-length trippy adventure.

Awesome is the eponymous protagonist, a Scandinavian-American robot-making giant who is jilted at the altar by his erstwhile downstairs neighbor-cum-betrothed, Glorious Jones. Awesome is left alone on his wedding day for good reason. Though a charismatic and extremely attractive giant man with straight white teeth, a killer fashion sense and loads of money, he is also a bit of a jerk.

Perhaps, more accurately, Awesome could be called the embodiment of his own id. His appetite for both food and carnality is insatiable. Acclaim for his intelligence and physical beauty heaped upon his high shoulders rolls off unabsorbed as he embarks on any number of his compulsory hedonistic pursuits֖12-times-daily physical pleasure, playing alpine bells, annual 10-month vacations and so on. Not to say he's unlikable or discourteous, he's just pretty tightly wrapped up in himself.

One of Awesome's pastimes is the invention of religions, and the self-centered nuptial ceremony he concocts for his and Glorious Jones' wedding predictably angers Ms. Jones enough to cause her to escape from the altar with a grappling hook. Alas, even a wunderkind giant isn't immune to love's folly, and Glorious Jones gives Awesome one last chance to prove his love for her by embarking upon the widest-ranging scavenger hunt ever conceived, beginning with the search for the perennial needle in a haystack.

If "Awesome" is already sounding like an unconstrained bit of fiction, well, that's because that's exactly what it is. The story barrels along like Awesome occasionally does through flimsy wooden walls, rarely letting off the gas for one to consider too closely the gaping logical fallacies: Yes, Scandinavian-Americans are probably taller than average, but can they be giants? Is it really possible for pumpkin to be converted into artificial skin?

All the contradictions of biology and physics fall second to the objective at hand: for a megalomaniacal superhuman prodigy (symbolic of all of us, presumably) to put aside his ego for a decade or two to find a four-leaf clover and De Soto's bones to appease his estranged love. It's a small price to ask for love, after all.

Pendarvis' great skill is to crafting the story with such good pacing and humor that the silliness becomes self-sustaining instead of distracting. "Bizarre," "surreal" and "psychedelic" are the easiest adjectives to tick off when describing "Awesome," but "unencumbered," "funny" and even "kind of sweet" are just as valid.

It's a nice change of pace when a love story can tend more toward the funny "High Fidelity" end of the spectrum than the heavy-handed and depressing "Atonement" side. "Awesome," though, is even further out in left field while still holding on to such a universal theme.

Of course, I could have totally missed the mark here. This may very well be a book about hats and hippies, robot betrayal and polyamory. It's all those things, too. And if you're not in the mood to read a charming tale about the range of human emotions, "Awesome" still delivers.

One caveat, though: Read this book privately. And if happens to accompany you to the beach or poolside, keep far enough away from strangers so that they might not be alarmed by your exclamations of "What?!" and accompanying laughter. "Awesome" is one of those stories where you'll have to bite your lip to keep from laughing aloud, and I've read enough David Sedaris on subways to know that it's far more enjoyable to just let loose with that cackle instead of bottling up. And if your ego is less fragile than mine, go ahead and read away next to other members of the public.