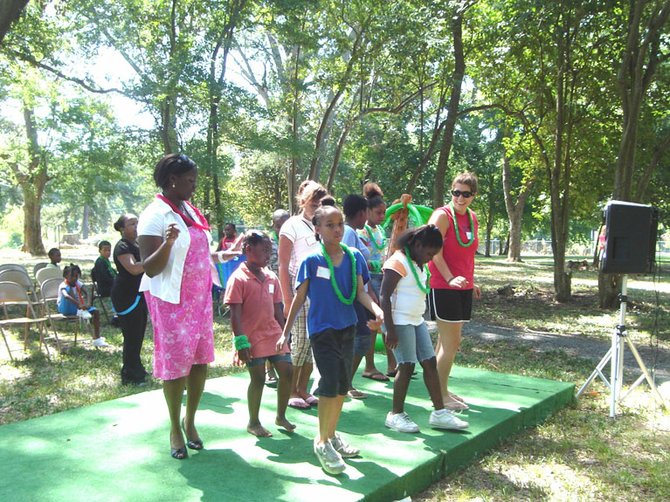 You can easily miss the entrance to Claiborne Park between Provine High School and Voice of Calvary Ministries in West Jackson. The private park is owned by Voice of Calvary Ministries and Baptist Medical Center, which have a three-phase plan for its development: Phase I is the sidewalks, benches and lights, completed with a grant from the Department of Wildlife and Fisheries. Phase II is a pavilion that erected by volunteers from Baptist Hospital, Trustmark and VOCM in 2009. Phase III is an amphitheater.

At the July Voice of Calvary Ministries Youth Rally, President and CEO Erma Driver, takes me over to a bench in the shade. She has green marker marks on her chin and fingers.

"This (the rally) is in response to what the parents say they need," Driver says.

Kids ages 7 to 13 are moving from station to station every 12 to 15 minutes. They have five game stations set up and one rest station with water and oranges.

Driver says more than 100 participated in the youth rally in June, and there seems to be around half that filtering in.

Through the support of numerous sponsors and partners, Driver's group has restored and renovated 270 homes in West Jackson, developed 16 homes in McComb for Hurricane Katrina evacuees, maintains a youth development program including summer camp for over 130 children, teaches homebuyers education and financial literacy, and runs a GED program.

The average years of business experience in business among the staff is 25, according to Driver, who worked for Compaq Computer Corp. in Houston, Texas, before moving to Jackson.

As five boys race each other in the crab walk, Empowerment Center instructor Paul Almeida, says, "This is what ministry is aboutempowering communities."

Almeida, a tall football-player type with wide eyes and sleeves cut off at his shoulders, says, "It lets the kids know that we care about them, God cares about them. ... That's when kids get messed up, when they have no options."

The mission is John Perkins' three Rs: reconciliation, relocation and redistribution. "My job has been to modernize that, make it more applicable to our lives today," says Driver, who got the position last year over 35 other applicants.

She has nine staff members and more than 1,000 volunteers. The interns this year are all white and except for one, are from states outside the South.

Former Spann Elementary School teacher and Ole Miss graduate Chaeli Chambers, 25, is a summer intern from Batesville. She is fair-skinned with red hair and olive eyes. "It's like relearning the city. It has been a completely different experience for me," she says of her new life in West Jackson.

"Going to different community organizing meetings, just meeting different people from different organizations, I just felt like all the white people were from other places. I started to feel a little weird about being the only white person from the South," she says, shifting her eyes away. "I know that's kind of a weird thought, but I just wondered why there weren't more local people involved in community organizing, reconciliation and that kind of thing. I don't know. I'm still trying to figure it out.

The board chairman is Sam Walker, wealth management vice president of Trustmark National Bank; the vice chairman is Tommy Williams from Butler-Snow law firm; and Belhaven professor Gary Rollins, Justice For All Executive Director Pat VanderPol and several other Jackson residents from outside the West Jackson community sit on the board.

"That's the good news that people don't hear often enough. There are some people who are committed to making things better, creating change, making sure people know that there is good in every part of our city," Driver says.

With neon hula hoops at his feet, Almeida says: "This is what it is, you can write this down, when people see that you genuinely care about their existence, their well-being, then people are less hostile, find it easier to trust. A lot of folks around here have been burned so many times."

The youth rallies resume in the spring.