It Just Is: Nurturing A Child's Spirituality 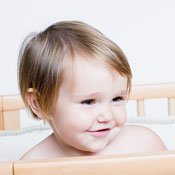 When children are born, human parents experience something spiritual just by being in the child's presence—their fingers and toes and eyelashes, the smell of their skin, and the way their eyes fix on people and objects.

Parents joke about the way their child is watching the balls above his crib, suggesting he might grow to be an astronaut or a basketball player, imposing their ideas on the nonverbal child. It's easy then.

Then the child grows, and when he points and says, "What?" parents answer: "Ball." And the child responds: "Ball."

This is spirituality—naked and raw. It just is. In the beginning, the parent is the child's god. He or she is the person the child questions about things that take belief and faith, including language.

Until recently, scientists believed pre-adolescents were too self-centered to process abstract concepts but current research shows that by age 5, children have a concept that something deeper exists, but they lack the language to express it.

That's where parents come in. Adults tend to be consumed by the here-and-now of experience, however, while children get lost in the flow of experiences. This makes the conversation more challenging.

"It is difficult to acknowledge that children can and do have experiences that adults do not have, are not having or may not have had," says Edward Robinson in his book, "The Original Vision: A Study of the Religious Experience of Childhood" (Seabury Press, 1983).

Robinson says an initial step for parents is to accept that many humans have experiences that they alone identify as spiritual, especially children.

"All children are born poets," said poet Brenda Hillman on Nov. 8 at Tulane University. But our increasingly materialistic and fast-paced society doesn't allow us to get through school and life with that wonder and curiosity we have in the beginning.

Minister Jeanne Nieuwejaar says in "The Gift of Faith: Tending the Spiritual Lives of Children" (Skinner House Books, 2003) that adults can combat this problem. "We (parents and teachers) need an attitude that permits us to heed the plant that died, the seed that sprouted, the fragrance of the night, the cloud that turns a miraculous shade of amethyst, the man who cries or the fingers that tremble," she writes.

In 1991, the United Nations Convention on the Rights of the Child declared that spirituality, free from religious context, is seen as a necessary and crucial part of human development.

Children need adults to also be interested in cultivating a spiritual life more than they need the "right" answers. Parents don't have to play God if they admit that they are curious, too.

Help from Above
The child says: "I'm afraid. If I go way over there, something might happen."

His mother felt he was going to cry so she held him and said: "You should not be afraid. God is out there so you shouldn't be afraid. He is watching over you."

He says, "Is God really out there?"

The boy ran to the door but could not go out. "I'm still afraid."

(from "Choctaw Stories," (University Press of Mississippi, 2004, $22) collected and annotated by Tom Mould)

10 Principles for Spiritual Parenting
1. Know God cares for you.
2. Trust and teach that all life is connected and has a purpose.
3. Listen to your child.
4. Words are important; use with care.
5. Allow and encourage dreams, wishes, hopes.
6. Add magic to the ordinary.
7. Create a flexible structure.
8. Be a positive mirror.
9. Release the struggle; admit you are struggling.
10. Make each day a new beginning.

Read more about these concepts in "10 Principles for Spiritual Parenting: Nurturing Your Child's Soul" (Harper Paperbacks, 1998, $13.99) by Mimi Doe and Marsha Walch.