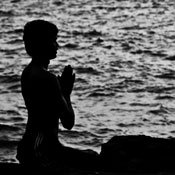 These women—some of them strangers—touch him with their hands. He prays for them by playing music because he is a musician by trade and by heart. In turn, they show up every Thursday for the healing service.

Contemporary research points to the benefits of prayer as a contributor to overall well-being and a good life. Praying produces physical benefits like reduced blood pressure; psychological and emotional benefits such as a decrease in depression and fear; and spiritual benefits such as preparation for death.

No research says prayer can cure you if you are ill. However, prayer can reduce stress and promote a more positive outlook on life. There are dozens of studies on the subject, none of which are absolutely conclusive because the language of spirituality versus religion is subjective. And the word "prayer" itself is open to interpretation.

So what is prayer?

For me, prayer is silent reflection. For my partner, prayer is closing his eyes and praying to a Christian God.

American poet Jorie Graham says this about prayer in her poem of the same name: "[T]his (prayer) is freedom. This is the force of faith. Nobody gets / what they want. Never again are you the same. The longing / is to be pure. What you get is to be changed."

Emory University theologian Roberta Bondi said in an interview on http://www.religion-online.org: "One of my favorite sayings of the monastics is that prayer is warfare to the last breath. Prayer is hard work—and painful a lot of the time because it makes us face parts of ourselves and accept parts of ourselves that we'd rather not."

In a May 1997 article in Essence magazine, the New Orleanian author and storyteller Luisah Teish says the African American community has historically relied on prayer as a healing exercise.

"Because of limited access to quality health care and our distrust of the medical establishment, we have occasionally relied on spiritual healing through such practices as prayer and the laying on of hands," Teish says. "Most of us, at some time, have used prayer chanting or proverbs as ways to guide, direct and heal ourselves."

Today, medical research supports these ways of coping. Researchers have taken a serious look at prayer and spirituality as a healing mechanism in the last two decades. The American Cancer Society sums up the numerous articles on their website (http://www.cancer.org) like this: "The U.S. Office of Technology Assessment reported that a survey of articles published in the Journal of Family Practice over 10 years found that 83 percent of studies on religiosity found a positive effect on physical health. Another study of two major psychiatric journals over 12 years found that for the studies that measured religiosity, 92 percent showed a benefit for mental health, 4 percent were neutral, and 4 percent showed harm. Religiosity was measured by participation in religious ceremony, social support, prayer and belief in a higher being."

What do we get from prayer? Whether we pray through making music, practicing yoga, meditating, kneeling with hands together or simply stopping for a moment of quiet, what we get is to be changed over time and to be more aware of ourselves.

"Well-rounded patients are generally healthier," according to a public-health expert and university professor at Loyola University New Orleans. "You can't put all your eggs in one basket whether (the basket) is faith, a person you love or a job." She says we must seek nourishment from many different places.

In their paper "Prayer and Subjective Well-Being: An Examination of Three Different Types of Prayer," Brandon L. Whittington and Steven J. Scher, professors at Eastern Illinois University, surveyed 430 patients about the type of prayer they engage in and how it relates to their general well-being. Here are their results: Prayer types that produced positive medical outcomes: adoration, thanksgiving and reception. Prayer types that produced negative medical outcomes: confession, supplication and obligatory.

5 Unique Ways to Pray
• Water is a powerful spiritual symbol. As you soap and rinse in the shower, think about being cleansed of feelings of anger or regret.

• As you climb stairs, concentrate on the exertion of your muscles and your breathing. Take the time to notice your body at work and appreciate your good fortune.

• Take a 10-minute walk in a meditative way. Feel your feet touch the earth. Walk slowly and deliberately.

• Tuck blessings into your child's lunch box on post-it notes for happy eating.

• Take an hour, once a week to be silent.