Carving Nature at Its Joints 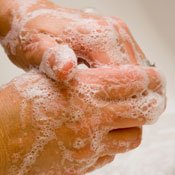 I cannot sleep near a cat I don't know without seeing images of his or her reptilian diamond-head fangs clamping down on my ear and sucking the life out of me.

When I was 7 or 8 years old, I said to my mother, "I can't turn to wash my hair in the shower because I have to keep my eye on the drain." To which my mother replied: "You're not afraid of the drain."

But I was afraid. I would turn, tilt my head back and be seized by the image of a 12-foot python squeezing itself through the hole in my tub. Sometimes I even looked out at the toilet to make sure the snake didn't take a wrong turn.

What is obsession? Everyone experiences it on some level. The phrase OCD (obsessive-compulsive disorder) has snaked its way into our English lexicon as a term for anyone who is driven, quirky or detail-oriented.

When does obsession become a mental illness? The American Psychological Association calls my "reptile" thoughts "obsessional intrusive thoughts," and says that nearly everyone experiences thought like them. For some people, though, these intrusive thoughts are more intense, longer lasting and become physically and mentally distressing.

The medical community considered obsessive-compulsive disorder to be rare until the mid-1980s when the medical community started to zoom in on its actual frequency. The seminal book on the subject, Judith Rappaport's "The Boy Who Couldn't Stop Washing: The Experience and Treatment of Obsessive-Compulsive Disorder," was only published in 1989, just 21 years ago.

OCD affects men, women and children of all races and backgrounds equally, according to the International OCD Foundation. The foundation estimates that one in 100 adults—or between 2 million to 3 million adults in the United States—currently suffer from the disorder. This is roughly the same number of people who live in the city of Houston, Texas.

About half the time, the disorder starts in childhood, Rappaport writes. At least 1 in 200 (or 500,000) kids and teens have OCD, about the same number of kids who have diabetes.

Trying to determine the source of obsessive-compulsive disorder, like many other psychological conditions is, in Plato's words, like trying "to carve nature at its joints," researcher Jonathan S. Abramowitz writes in the "Clinical Handbook of Obsessive-Compulsive Disorder and Related Problems." The disorder runs the gambit of severity: Some people count steps, some wait for the clock to strike a lucky number, and some can't get out of bed because the obsessions are too frequent and too powerful.

What is the difference between an obsession and a compulsion? HealthCentral.com says that obsessions are "thoughts and images that won't go away," while compulsions are recurrent actions. Sometimes, compulsions "are ways for people to try to relieve themselves from their obsessive thoughts."

Common obsessions include fear of contamination, aggression, symmetry, sex, religion and pathological doubts. Common compulsions, often called "rituals," include cleaning and washing, ordering, repeating, checking, hoarding, and counting. Washing is still the most common compulsion, even in cultures where cleanliness is not of value, Rappaport explains.

Obsessions can take the form of disturbing thoughts that violate an individual's sense of morality, as in the case of a 38-year-old patient of Rappaport's.

"My name is Sam," the patient wrote. "I am a very successful professional in a very large city. … I am a survivor. If you don't believe so, count the references to death in this account I'm giving you."

Often, patients don't trust themselves. "This is a disease that may be thought of as skepticism gone wild," Rappaport writes.

Genius has also been linked to OCD. Hungarian inventor and engineer Nikola Tesla—whose inventions include the radio and alternating current (AC) electrical systems—always did things in threes, was disgusted by pearl earrings and was, by his own account, appalled by dirt and dust.

Sure, it is irrational—cockamamie even—but for those who are in the throes of this complex and devastating disease, they have to complete their rituals. If our brain told us a window was a door, we'd walk through it every time.

OCD in Children
Talk to your child's doctor if you are concerned that your child may be an OCD sufferer. Parents can look for the following possible signs in their kids:

• Raw, chapped hands from constant washing.
• An unusually high rate of soap or paper towel use.
• High, unexplained utility bills.
• A sudden drop in test grades.
• Unproductive hours spent doing homework.
• Holes erased through test papers and homework.
• Requests for family members to repeat strange phrases or keep answering the same question.
• A persistent fear of illness.
• A dramatic increase in laundry.
• An exceptionally long amount of time spent getting ready for bed.
• A continual fear that something terrible will happen to someone.
• Constant checks of the health of family members.
• Reluctance to leave the house at the same time as other family members.
SOURCE: http://www.kidshealth.org.