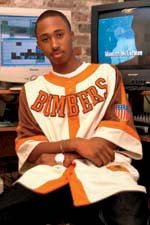 Madison Central sophomore Montrel McClenton, 16, looks right at home seated in front of the computer monitor, TV screen and editing equipment at Back Porch Film & Video, at the Mill Street end of Keener Avenue. He should. For the past few years, McClenton has been learning the ropes from his step-dad Ted Davis, owner of Back Porch. On its colorful business card, the company's motto says, "We help you tell your story." That they do.

McClenton's story starts with pulling cable as a young gofer for his step-dad. Intrigued, he told me he soon wanted to know more and "I wanted to get my hands on the camera." When he was 14, the opportunity came about to make his first film, "Did You Know? Neighborhood Leaders and Heroes," for which McClenton interviewed Faye Peterson, Charles Evers and Robert Clark.

It was also McClenton's first acting experience. During the 11-minute short, McClenton and his classmates, students from Abundant Life Christian Academy, discover these three real-life heroes—right here in Jackson—people who made history come alive. Like many of today's students, McClenton says they had a vague awareness of the events surrounding the Civil Rights Movement, but were shocked to hear first hand that African Americans couldn't use the same facilities as whites, couldn't enroll in the same colleges and were treated so horribly by the police. McClenton received a Special Award of Encouragement at the 2002 Crossroads Film Festival.

McClenton stays busy. He and Davis are polishing a public service announcement, one aimed at teens and their parents. The 39-second spot—"And the question is?"—packs a powerful message. The pair are shopping it to local media outlets. Meanwhile, McClenton will soon produce a second PSA about the effect of a violent household on a little boy, played by his 6-year-old brother Branson. Planning to attend a "bootcamp" for young filmmakers this summer and deciding where to attend college occupy McClenton these days, too.

But his ultimate goal is to produce and direct movies, although it's obvious he's got the knack for working in front of the camera, too. With a bit of teen-aged confidence, McClenton predicted he just might end up the CEO of his own film company someday, having gotten his start right here in Jackson, Miss. He smiled and said, "I won't forget about that."