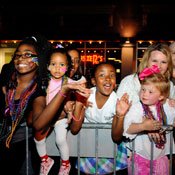 Little ZDD participants are lovingly called tater tots. And, yes, there are beads to catch.

Here are a few terms to literally increase your knowledge of the phenoms known far and wide by the acronym SPQ.

Spud Studs: According to "The Sweet Potato Queens Book of Love," Spud Studs are "men in the entourage of the Sweet Potato Queens who make themselves useful in various and sundry delightful ways. May include current and/or former boyfriends, fiancés and husbands. No one is ever allowed to escape." On parade day, the Spud Studs' usefulness extends to marching alongside the SPQ float and making sure no one gets dangerously exuberant in their quest for beads.

Wannabe Wannabe: After a few years, the Sweet Potato Queens who ride the queenly float upgraded their finery to include even more sequins, fringe and foam rubber. This led to the idea of the official Wannabes finding their own Wannabes, women who willingly jumped at the chance to march in the parade in the earlier finery. Willingly in neon letters, I might add, 'cause that's what I got to do myownself (a favorite SPQ word).

Four Major Food Groups: According to the Sweet Potato Queens, these would be Sweet, Salty, Fried and Au Gratin. (My advice, partake of one or more group during the Zippity Doo Dah Parade and Festival Weekend at various locations around Jackson.)

Kacey Jones: Not the railroad man or the baseball man, Kacey Jones is the official Songstress to the Sweet Potato Queens who wrote and sings "Never Wear Panties to a Party," the SPQ anthem. (Parade weekend, you may hear it often enough to have the anthem stuck in your head for days.)

Tammy: The official name of each and every Sweet Potato Queen, used to preserve some shred of a semblance of anonymity. (In other words, you may now call yourself Tammy followed by the name the world knows you by, as in Tammy-Lynette or Tammy-Ronni.

Tiara: The outward physical symbol of the inward spiritual act of embracing one's own Queenliness, should be worn for some part of every day—it's important. (This is the same tiara which sparkles splendidly atop the curly, glossy red hair on parade day.)

Lolling About: The official activity of the Sweet Potato Queens, sometimes referred to as "Not Doing Jack Sh*t." (Parade weekend means little to no lolling about due to the amount of fun to be had.)

You're all set now. You know how to talk the language. You're ready to parade like royalty. Just be careful who you make promises to, if you know what I mean.

Lynette Hanson was a proud Wannabe-Wannabe before she moved off to Portland, Ore.