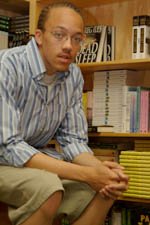 Tall, slim, wearing his hair in neat, short braids, David Dennis Jr. looks like a high school basketball player, maybe on his way to play in college—if he's got the grades. That's the stereotype, anyway.

Stereotypes represent an oversimplified opinion or a prejudiced attitude about an individual or a group. Dennis, 18, is not a proponent of their use.

He knew since he was 4 or 5 that his parents, David and Carolyn Dennis, valued education. "My mom would quiz me on spelling. And it was difficult to ask a question involving numbers, because she'd make me figure it out for myself," Dennis told me, grinning. From his three older sisters—Andrea, Stacie and Erika—he learned to respect females and how to hold his tongue. From his dad, listening as his father spoke around Mississippi about helping direct Freedom Summer in 1964 and the work that still needs to be done, Dennis learned about being involved in the community.

High school and Jackson are much on his mind. "There's too much sectionalism here," he said. "Students need a way to meet in a friendly, safe way."

Surprising his parents—who joked that he had no rhythm—Dennis joined the Sigma Beta Club Step Team, made up of students from Murrah and Callaway, two years ago. At first, the rivalry between the two schools was evident. Time and togetherness did away with that as they practiced, competed and raised money for Habitat for Humanity's "Building On a Dream" houses that honor Dr. Martin Luther King Jr.

Dennis is convinced that Jackson's high school students can do something positive about the sectionalism. Once students get to know each other—whether they're from North or South Jackson, schools that want to thrash each other in sports, public or private schools, no matter their ethnicity—Jackson will become better. "At Murrah, students have good relationships, so it's not like it can't happen. Get everybody in the same place, get them over their reluctance to get together because of built-in stereotypes—blacks cause problems, whites are overtly racist. Among today's young people, there's a distance from what was going on 40 years ago. High schools need to join together."

For the record, Dennis has the grades and is on the way to Davidson College in North Carolina, and he does play basketball, but that's because the one-and-only video game he plays is ESPN's NBA basketball.

I believe that Dave Jr. is right, BUT there are some stipulations. It's hard for students at my beloved Lanier High to interact with other students who look down on us. Many times, we aren't invited to participate in activities such as the intertwined step club. I feel that it is because some students honestly believe that they are better than students who attend Lanier, which is located in a neighborhood that's rich to us, but poor to those who live in Lakeover. I believe that Dave Jr. is absolutely right about everything that he said, and I applaud him for making that observation so boldly KEEP UP THE GOOD WORK